All my life I have enjoyed studying maps in minute detail and tracing the lines and curves of the coast with my finger: Matapan; Tierra del Fuego; Kamchatka.  In my mind I always saw the North coast of Scotland as a remote, empty landscape ending in a rampart of perpendicular cliffs, an immemorial barrier to the crash and swell of the Arctic Ocean.  I found it to be like that in places, as I walked westward from John O’Groats to Tongue, but often the land ended in a gradual grassy descent to rocky promontories or isolated sandy beaches.

On my way to Thurso I stopped at the Canisbay Kirk at Kirkstyle.  John O’Groats is buried here, having died in 1568.  The Queen Mother used to holiday nearby at the Castle of Mey and in the church porch I saw photographs of her and Prince Charles, taken over many years.  Walking along a rough coastal path in front of the Castle I met a couple enjoying the view over the Pentland Firth to the Orkneys.  They asked me how far I had walked around the coast and when I told them the lady clasped her hands and beamed at me: “Isn’t that wonderful?” she said to her husband, “Everyone should have a dream!”.

On a morning of appalling weather I groped my way through driving rain and gale force winds to the point of Dunnet Head.  I wanted to go all the way to the Stevenson Lighthouse at the end of the peninsula because it is the most northerly point of mainland Britain, 2.5 miles further north than John O’Groats.  I had never seen waterfalls flowing backwards before: the wind was so strong at Dunnet Head that a number of waterfalls were being blown up the cliff and then flipped back over the cliff edge!

Thurso is the Northernmost town on the British mainland.  It is a small, friendly place and the only settlement of any size on the North coast.  I imagine it will be the last town that I am going to see until I reach Fort William, half way down Scotland’s West coast.  Founded by Vikings, Thurso was named after the God Thor.

Round the bay from Thurso I came to Scrabster.  I had always seen Scrabster in my mind’s eye as the busy harbour at the End of the Earth; a storm tossed world of cargo ships and fishing vessels heroically plying their trade in hurricane force winds and mountainous seas.  That may well be the case, but Scrabster itself was tiny:  a place of pint sized quays, a miniature ferry terminal for boats to the Orkneys, a couple of pubs, half a dozen houses, and that’s about it.

Just beyond the Dounreay nuclear power station I came to the Wagnerian sounding Bridge of Isauld.  Just beyond that I came to the last active bus stop on the North coast of Scotland which was a surprise because I had planned these walks to Tongue around a sheaf of information and timetables that I had been given at the Information Desk in Inverness Bus Station.  After intense study of these timetables and maps I knew the times of every bus and the location of every bus stop on the North coast.  The only detail those helpful folks at the Inverness Bus Station had withheld from me, as I now discovered, was that the service had been suspended six months previously.

Most days I walk from start to finish without a break.  However, the mill race at Forss absolutely stopped me in my tracks.  I walked round a number of disused and ancient stone buildings and descended a flight of rough hewn steps to the river.  I was transfixed by the beauty of the place and spent half an hour sitting on a bench in the sun almost deafened by the roar of the surging waters.  I felt I could quite happily have spent the rest of my life there.

Moving on though, I continued westwards to Strathy Point, a thin finger of rock projecting out into the Atlantic, topped of course by another Stevenson Lighthouse, (one of over two hundred such lighthouses which ring the Scottish coast).  It was strange to find myself walking back down the peninsula, walking southwards towards the north coast!

One way I compensated for the lack of public transport was to catch rides on school buses which, when having dropped the children off at school, returned empty on the homeward run.  On one occasion, when all else failed, I was extremely grateful to Carl, the owner of the Bettyhill Hotel, for the offer of a lift.  I spent two nights at Bettyhill which is named after the Countess of Sutherland who presided over some of the most infamous of the Highland Clearances, when wealthy landlords all over the north of Scotland decided there was more money to be made from grazing sheep on their estates and therefore summarily closed down villages and moved their tenants off the land, often to areas where the land was too poor even for sheep to graze.  Between 1811 and 1821 the Countess cleared 15,000 people off her land and rehoused them in a purpose built village named after herself: Bettyhill.

From Bettyhill I walked out to Skerray Bay on my way to Tongue.  Names on the map which I had assumed referred to villages appeared to actually refer to single houses.  I passed a number of red telephone boxes which had been turned into book exchanges.  A particularly erudite selection at Achtoty: T.S. Eliot, Virginia Woolf, Iris Murdoch.  Skerray Bay seemed remote and unvisited and I sat for a while on the breakwater, a serene moment of absolute tranquillity.  Eventually I reached the Kyle of Tongue, a long fjord-like gash in the North Coast.  A storm, dark and menacing, was massing over the Kyle as I looked down at the long causeway bridge which wound across to the far shore and which I would cross, on my way to Cape Wrath, at the start of the next series of walks.

On my last day I took an early train through the Central Highlands back down to Inverness.  Time was, when I had been walking Northwards towards Inverness, that it had seemed like the last and frighteningly small outpost of the familiar world.  Now, I was approaching Inverness from the North, with a sense of elation, and I felt as if I was returning to “a great southern metropolis”, to borrow a phrase from H.V. Morton’s 1942 travelogue “In Scotland Again”.

“Red Hot Pokers”. Seen in gardens all along the north coast.

Looking ahead to Scrabster, from Thurso.

The mill race at Forss.

From the Bridge of Isauld. 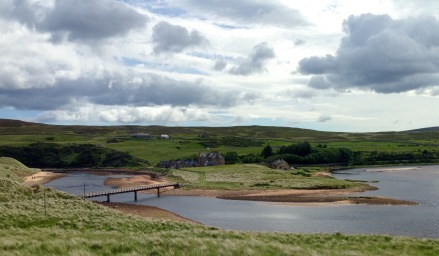 Bridge over the Halladale River near Melvich. 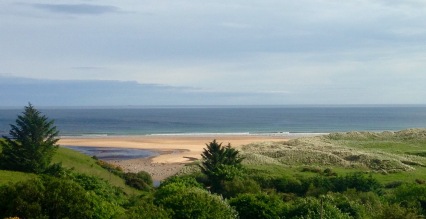 Looking south towards the north coast of Scotland from Strathy Point. 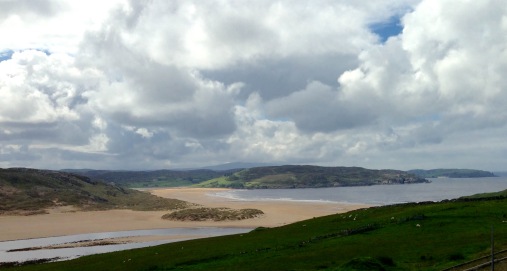 The beach at Bettyhill.

One of a number of postboxes in the middle of nowhere. Six collections a week!

The view to the east from Skerray Bay.

Bridge over the River Naver, Invernaver, near Bettyhill. 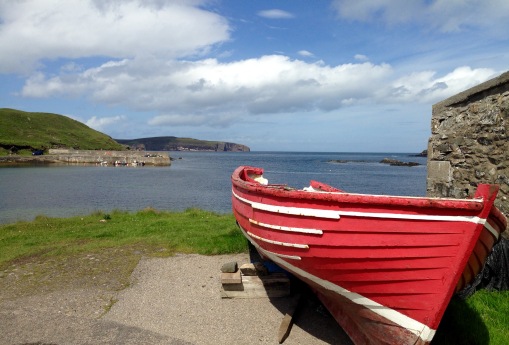 Wet underfoot, between Bettyhill and Tongue.

Storm over the Kyle of Tongue.

Looking ahead to the Causeway Bridge across the Kyle of Tongue. The first stage of the next series of walks. 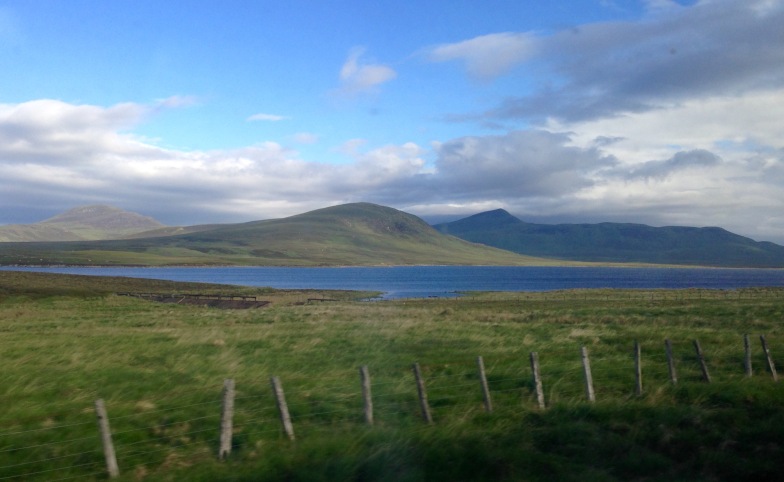 The Highlands. Taken from the southbound train from Thurso.