From Berriedale I walked the last miles of the East coast of Scotland to John O’Groats and then set off along the North coast as far West as the little village of Tongue.  It was a long walk so I will record it here in two separate Posts.

The first two days of these walks happened to coincide with the worst weather I have ever experienced whilst walking.  Over a period of 36 hours the East coast of Scotland received a month’s worth of rain, the majority of which appeared to fall on my head.  The weather was so bad that I decided not to risk walking near the cliffs and so walked most of the way from Berriedale to Wick on the grassy verge beside the road.  The almost incessant, pouring rain was accompanied by tremendous gales.  The gusts of wind were so strong that I was often hurled aside and, when the wind caught my backpack, sometimes even spun round by the force of the blast.  Twice the conditions were so bad that it was safer to leave the verge beside the road and walk through the soaking wet grass in the adjacent fields.

I was wearing new waterproofs and brand new walking boots which worked a treat.  I could not help smiling to myself at the thought that there is in fact “no such thing as bad weather, just inappropriate clothing!”.

In Wick I found a room overlooking the Old Herring Market and the now empty Outer Harbour, with an uninterrupted view over the sea to the horizon.  “Nothing between you and Russia in that direction,” my landlord informed me.  He showed me black and white photographs of the quays in front of the Herring Market: hundreds of men, fishing nets, horses and carts, and thousands of barrels of salted herring.  Women gutted the herring at a rate of 40 fish per minute.  In the old photographs the Outer Harbour was a forest of masts: hundreds of fishing boats and long-lined schooners which took the barrels of fish to Europe, Scandinavia and Russia.  In those days Wick was home port to a thousand fishing boats.  It is a sad coda to this huge and heroic industry that today, with state-of-the-art computer-guided nets, one fishing vessel can catch as many fish as a thousand boats used to in the days of the black and white photographs.

I had a sleepless night in Wick, wrestling with my route for the walk next day to John O’Groats.  Was I going to walk directly to John O’Groats or would I follow the coast round to Noss Head Lighthouse which would add another five miles to an already long walk?  I knew all along that of course I would go the longer route via the lighthouse; nonetheless the enticing prospect of a shorter walk kept me tossing and turning so that I was awake to see the sun rising in red and purple somewhere between my window and Russia.

The rain of the previous two days having cleared I set off from Wick early, on a morning of clear skies, warm sun and a light breeze.  Passing Papigoe and Staxigoe I walked in the sunshine passed meadows full of buttercups and daisies.  From the Noss Lighthouse I followed the coast passed Castle Sinclair Girnigoe.  I was amazed to read that in 1651 the castle was seized by Oliver Cromwell’s troops and used as their regional stronghold for nine years.  Numerous times around the coast of Great Britain I have found Cromwell intruding on local history and have always been amazed how far his reach and influence seem to have extended.

With the best will in the world I have to say that I was a little non-plussed by John O’Groats.  It was a major milestone on my route, although it is not actually on the North East point of Scotland at all, and it is the end of a long distance overland walk from Land’s End.  Arriving in soft evening light with fine views over the sea to the Orkneys I am not sure what I was expecting: strangers rushing up to congratulate me on my achievement, bunting, flags, cheering crowds, a formal welcome from civic dignitaries, massed bands, choirs of angels?  At any rate, the “town” seemed to be more of a loose and random sprinkling of cottages with no obvious centre, and hence no one point to head for, apart from a sign advising how many miles it was to various places (874 miles to Land’s End).  At a crossroads I found a shop (closed) and an unsigned stretch of road where buses were reputed to stop.  I did not see a single person.  “Well, at least I am here” I consoled myself; but sometimes it’s nice to feel that my progress around the coast is witnessed by someone other than myself!

Something else which amazed me was to discover that it was not until the Fourteenth Century that this area had been wrested from Viking control and incorporated within the kingdom of Scotland.  The Viking name for the Far North of Scotland was Sutherland, because for them coming from the North this was indeed the Southern Land.  Coming from the sea the Vikings were usually only interested in the coasts of the lands they attacked and settled in.  Hence the name Wick is derived from Vik, meaning Bay, whereas Thurso (the small if major town of the region) refers to the River of the God Thor.  It seemed an interesting inversion that whereas we today are a land based people who venture down to the coast to enjoy views of empty oceans, the Vikings were a seafaring race who thrived at sea and only thought of the coastal littoral as the narrow band circumscribing their watery world where they would plunder and trade close to the beach.

Another day I walked out from John O’Groats (named after a Dutchman who used to charge a groat to ferry people across the Pentland Firth to the Orkneys) to Duncansby Point which is the true North East point of Great Britain.  There is a lighthouse on the point built, like so many lighthouses around the coast of Scotland, by a member of the “Lighthouse Stevenson” family, one of whom was the author Robert Louis Stevenson.

Rounding the corner at Duncansby I set off Westwards along the North coast of Scotland, but that, as they say, is another story or in this case another Blog Post!  (To be continued). 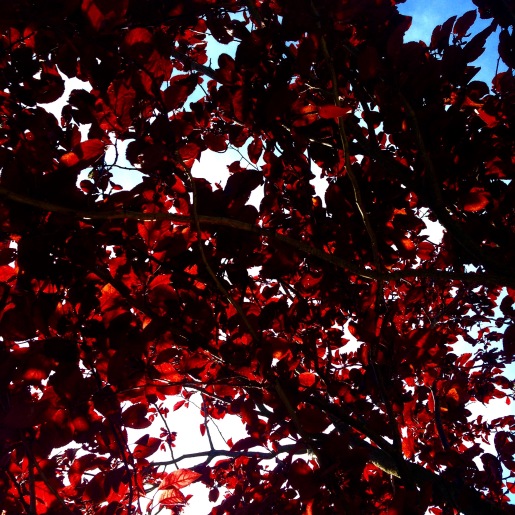 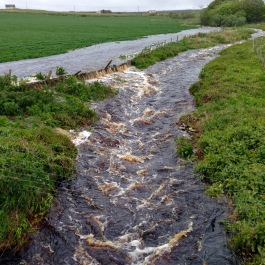 Flood waters surging off the fields near Berriedale 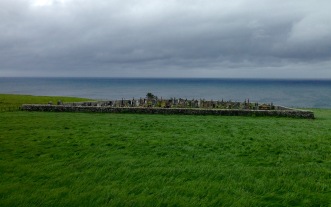 The Castle of Old Wick. 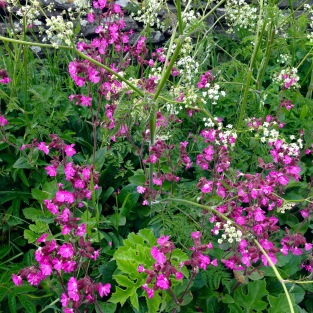 Ruins of the old Herring Market beside the harbour at Wick. 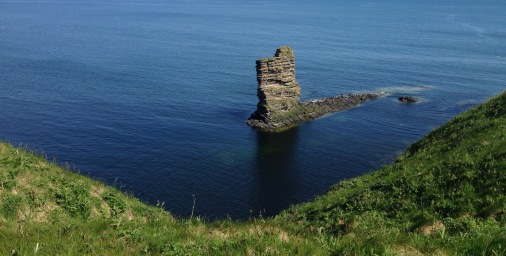 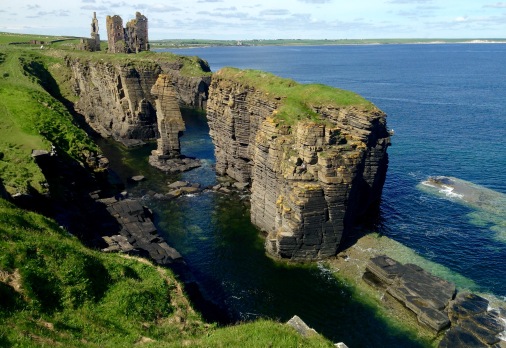 Angel by the sea. 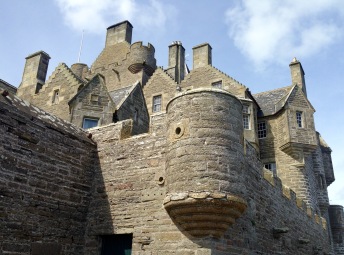 The road to John O’Groats with the Orkneys beyond.