Two giants once worked as cobblers either side of the mouth of Cromarty Firth, tossing the tools of their trade between them across the gulf between the two headlands which are known as The Sutors of Cromarty.  In summer a ferry runs between the two Sutors, but I had already decided that even if the ferry had been running, which in May it was not, I would walk from the southern Sutor round Cromarty Firth to the northern Sutor, which in the event took two long days of walking.

To start my walk I took a bus from Inverness out to Cromarty.  On the way the bus broke down.  The driver said that the same thing happened the first time he drove this route.  I asked him how many times he had driven the route since then.  “Never,” he said, “this is the second time!”.  I walked 25 miles that day, to Alness, from where I had hoped to take a bus back to Inverness in the evening.  I found the bus and was informed that it had broken down.  Beside the bus, looking disconsolate and smoking a cigarette, I found the same driver!

In the hills above the oil rig fabrication yard at Nigg I met a lady out walking her dogs.  She told me she had once walked from Land’s End to John O’Groats.  “It changes you, a walk like that,” she said; “You don’t come back the same from a walk like that”.  We agreed that the walking is the easy bit, just one foot in front of the other.  The hard part is the planning and the research, staying up till midnight googling hotel vacancies and bus timetables, juggling dates and locations, ending a twenty mile walk at the right place at the right time to catch the last bus of the day on towards that night’s accommodation.  All part of the adventure, but it does feel wonderful striding out in the early morning, knowing that all that day’s planning has been done!

I continued on to a convoluted section of coast in the shape of an anvil.  For a while I followed the Pictish Trail, passing a number of Slab Stones, incised with Christian symbols and geometric patterns.  At Nigg I stopped at the Old Church to see the Cross-Slab which was carved in the late 700’s AD and shows the earliest representation of the Eucharist ever found in the British Isles.

On a warm, sunny afternoon I passed the so-called Seaboard Villages, (waves crashing into the harbour wall at Shandwick) and then walked out to the Tarbut Ness lighthouse.  I spent the night close to the sea at Portmahomack, a strangely Native American sounding name, redolent to my ear of Mohawks and Mohicans.  And then on to Tain, a beautifully homely town where, architecturally, Scottish Baronial meets Hogwarts.  For the first time in Scotland I began to notice the widespread use of Gaelic on street signs.

In Dornoch I stayed in an old fashioned, creaking, wood panelled, hotel like a country house in an Agatha Christie novel.  Whilst there I visited Dornoch Cathedral, artfully suffused with golden light, compassionate and protecting like walking into one of Rembrandt’s autumnal masterpieces.  From Dornoch I spent a delightful foggy Sunday walking beside the sea along a disused railway line and then, with the world muffled into silence by the fog, around Loch Fleet to Golspie.  Just beyond Golspie I passed Dunrobin Castle, towered and turreted like one of Ludwig II’s Bavarian fantasy castles.

One stormy evening I walked out to the old pier at Elmo to watch the waves breaking over the venerable stone breakwater in clouds of spray and then pouring and cascading over the top into what had once been the harbour.  I found the force and indomitable power of the sea almost mesmerising.

Walking on through woods full of bluebells I continued to Brora and then up to Helmsdale.  Even though Helmsdale was much smaller than I had imagined I had trouble finding my B&B.  I asked in a pub and the owner took me back out to the street and pointed up to the surrounding hills where I could just distinguish a house.  In response to my expression of dismay he smiled and set me on my way with an encouraging nod.  After 45 minutes of near vertical walking I arrived at the front door!  In fact it was one of the best and friendliest B&B’s I have stayed in.  At that height I had a beautiful view of all the hills around Helmsdale, all flanked with flowering yellow gorse.  In Helmsdale I noticed that it did not get dark until 11.30pm and was light again at 3.30am next morning.

Two miles north of Helmsdale I came to the Ord of Caithness, a wild, desolate, trackless, granite massif.  Even though I was always within a mile or two of the coast road I had the alarming sensation that in terms of where I was actually walking I was miles from anywhere in a previously untrodden wilderness.  It was very strange: in spite of the presence of the road and although I knew that I was walking north parallel to the sea, I felt totally lost, disoriented and confused, as if walking through a featureless desert without a compass.  Eventually, feeling stunned and slightly shattered, I looked down from a great height towards Berriedale: a tiny village, but homely, familiar and reassuring.

I was relieved that this was the last day of this series of walks.  After 16 minutes waiting by the roadside in Berriedale I boarded a bus back down to Inverness. 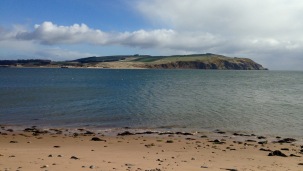 The Sutors of Cromarty: looking across the mouth of Cromarty Firth from south to north. 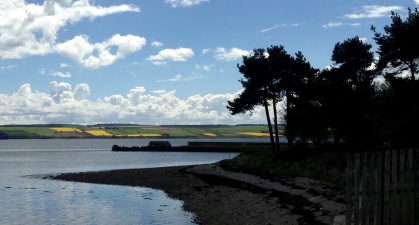 The Sutors of Cromarty looking from north to south. 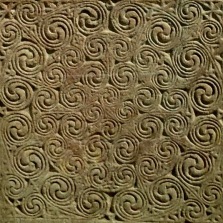 The Pictish cross-slab at Nigg Old Church: the earliest representation of the Eucharist ever found in Britain, late 700’s AD.

Shandwick, one of the Seaboard Villages. 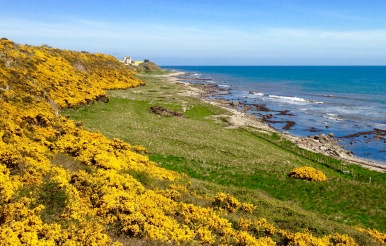 Walking along the outer edge of Easter Ross. 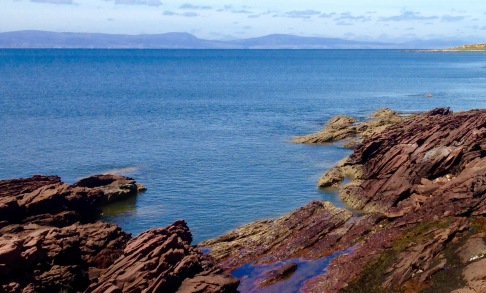 The same evening; in the distance the coast stretching northwards towards John O’Groats. 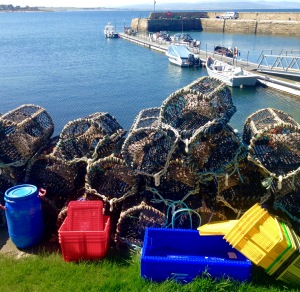 The Royal Burgh of Tain, looking rather Hogworts. 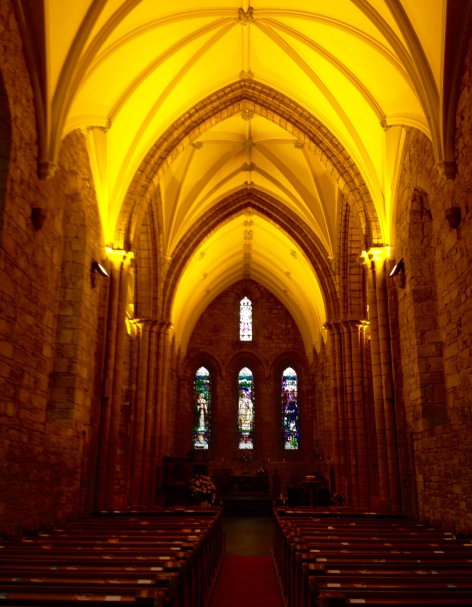 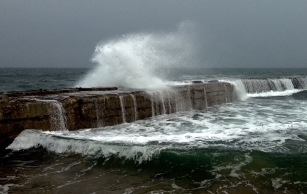 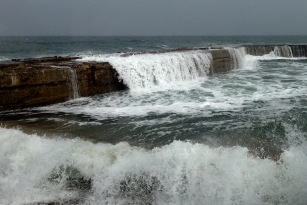 The old pier at Embo. 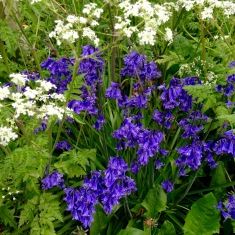 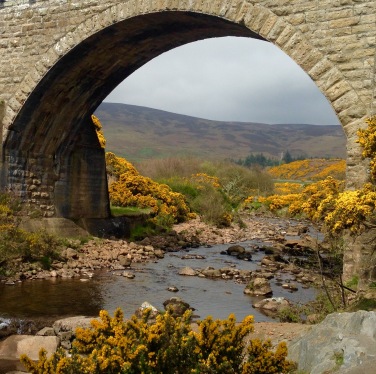 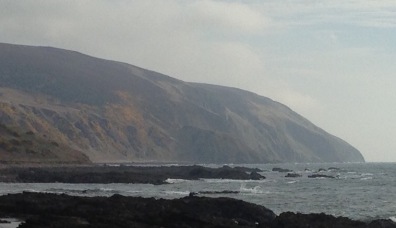 The awesome Ord of Caithness. 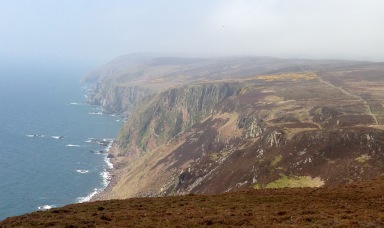 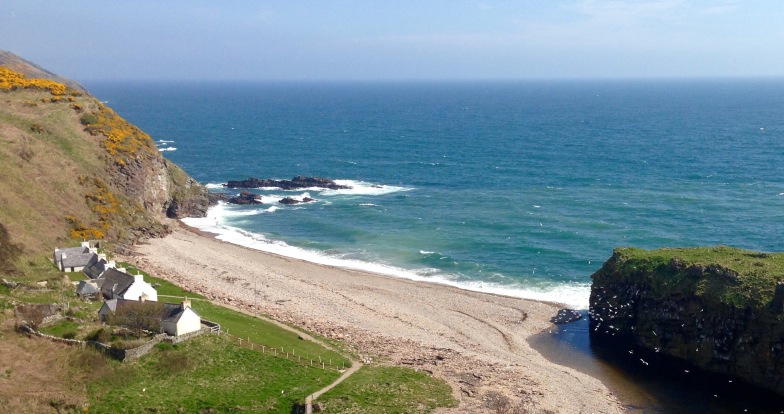 2 thoughts on “WALK 36 : SCOTLAND: FROM CROMARTY TO BERRIEDALE.”