I had always imagined that Cape Wrath was named for the tumultuous angry seas which pound the North West point of Great Britain.  In fact, I discovered, the name is derived from Old Norse: the Vikings called the Cape “the Turning Point” because sailing from Norway it marked the point at which they needed to turn their longships to the South.

Cape Wrath was a turning point for me too.  Walking along the North Coast of Scotland, the Cape was the last major corner I had to turn before I reach my journey’s end at Glasgow, roughly 500 miles along the coast to the South.

From Durness I took the once weekly bus back to Tongue to start my walk from the point at which I finished the previous walk.  It was a very long way back to Durness, through a vast empty landscape.  Heather, peat bogs, tremendous mountains near and far.  The walk around the shores of Loch Eriboll should have been a time to experience a sense of primordial stillness and to feel the massive presence and monumental indifference of the natural world.  In his 1942 travelogue “In Scotland Again” H.V. Morton drove through the same elemental landscape I now walked through from Tongue, describing it as “the very workshop of God.”  Eriboll he found “shattering”.  Things have changed though.

Since Morton’s time the road around the North Coast has been extensively marketed for tourism, now known to the cognoscenti as the “NC500”.  Not only does this make for a chronic shortage of accommodation, but it results in a regular stream of traffic: tourists, often driving very fast, in cars or huge motor homes, motorcycles in packs, cyclists usually in pairs; (strangely though I did not see a single walker).  One still has the view (and what a view it is) but seldom does one experience Morton’s “unforgettable solitude that must always haunt the memory of one who has seen it”.

In Durness I stayed for a week at the Youth Hostel which is adjacent to the Smoo Cave.  A waterfall flows through a hole in the roof of the cave, the hole having been formed by the Devil when he blasted his way through the rock to escape the confinement to which the Earl of Reay had subjected him.  The Youth Hostel is euphemistically referred to as “an old style hostel” (2 showers for 24 people) and consists of 2 wooden huts which were originally built to house the engineers and signalmen who manned the radio station on the hill above Durness during the Second World War.

Staying at the hostel was a joy, every day brought new people with interesting experiences to share; in the evenings I enjoyed comparing notes on our respective days with two deep sea fishermen from Sunderland.  One day they had the best day’s fishing they had ever had.

One evening at sunset I sat on the rocks at Rubha Creag Iain, at the seaward end of Loch Eriboll.  In 1945 these desolate shores witnessed the mass surrender of 33 German U-boats which were corralled in Loch Eriboll prior to being taken out individually, through the channel in front of me, to be scuttled in deep water in the Atlantic.

Walking up to Cape Wrath from Sandwood Bay I had to make a big detour to cross a river which was running in full spate and having done so, leaping from one big boulder to another, I missed the trail.  I got badly lost and spent 5 hours wading through peat bogs, often sinking up to my knees in water, trying to find my way.  However far I walked I never seemed to get any closer to the coast.  I soon gave up trying to ford the innumerable rivers and streams I came to and just walked straight through regardless.  Eventually I suddenly saw the white minibus which transports tourists to the lighthouse at Cape Wrath.  I was too far away to call to the driver but after a couple of hours walking along the dirt track road used by the minibuses another one appeared, with one empty seat, and in spite of my dishevelled condition I was welcomed aboard and driven down to the Keodale ferry which runs periodically across the Kyle of Durness.

It took half an hour to walk from the Youth Hostel to the mini market in Durness for provisions so I was happy when a driver pulled over to offer me a lift.  It was only when I was seated in the car and buckled up that he told me that he had recently had a stroke, “I keep going all giddy” he added.  Having dropped me off he was due to drive all the way along the North Coast back to Thurso.  I am still here to tell the tale; I sincerely hope he is too.

On my last day and almost on my last gasp, hauling myself up a tremendous slope near Kylesku, I met a cyclist from Dundee.  “You think this is steep?” he asked.  “Wait till you get south of Kylesku.  That’s steep”.  But mercifully I was homeward bound.  “South of Kylesku” will have to wait until my next series of walks. 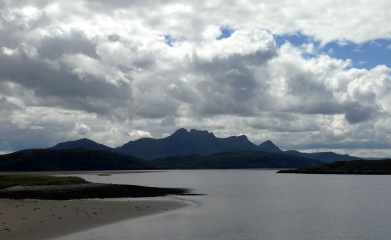 Looking back to the Kyle of Tongue. 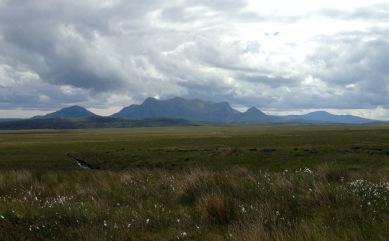 Walking from the Kyle of Tongue to Loch Eriboll. 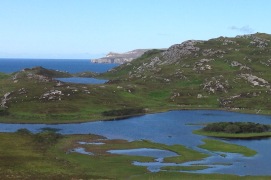 Near the mouth of Loch Hope. 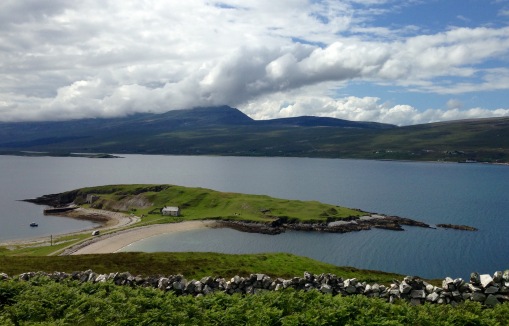 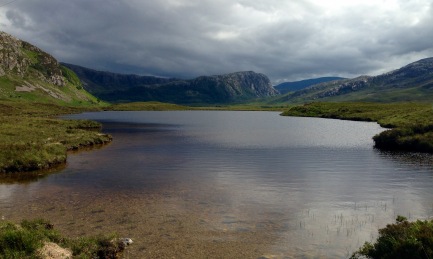 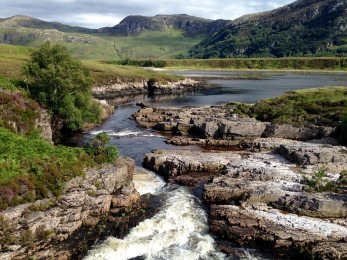 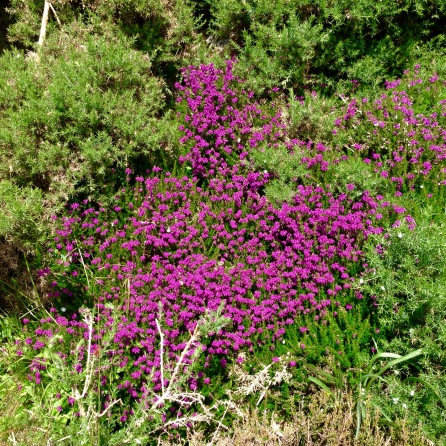 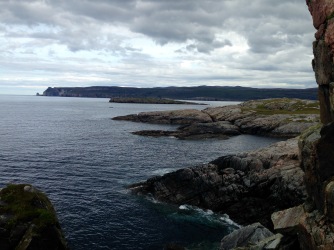 Across the mouth of Loch Eriboll, from Rubha Creag Iain, near Rispond. 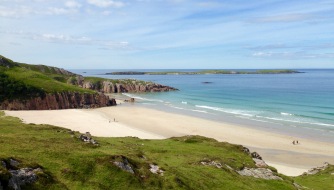 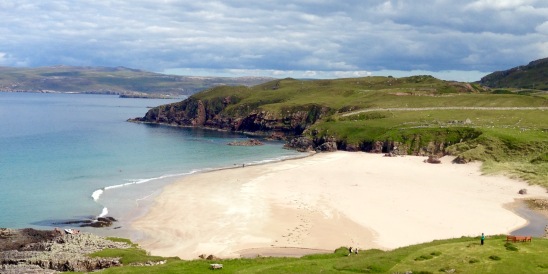 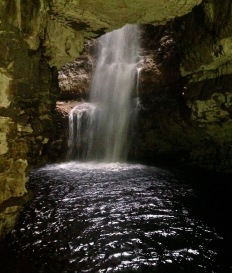 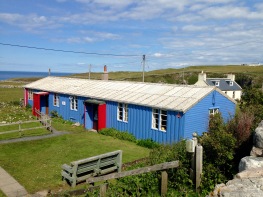 Youth Hostel at Durness, my home for a week. 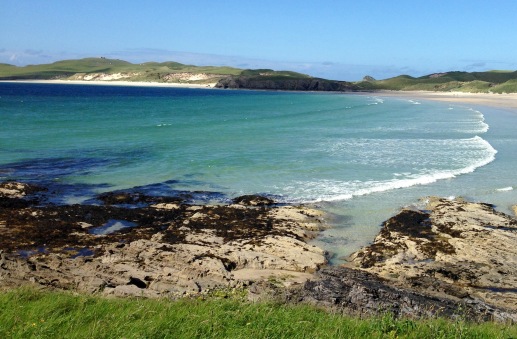 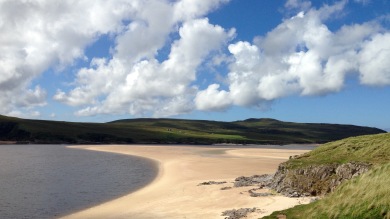 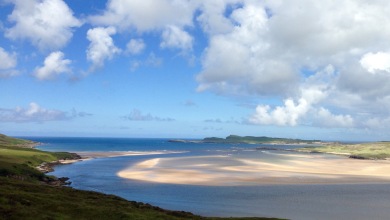 The Kyle of Durness. 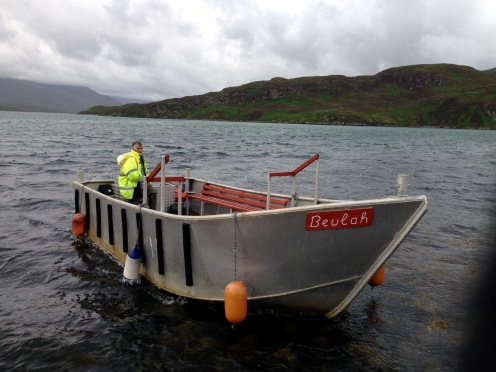 Keodale ferry to “the Cape”. 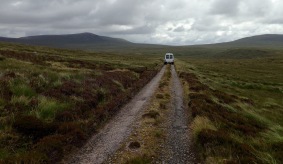 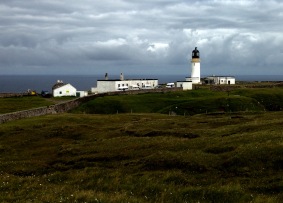 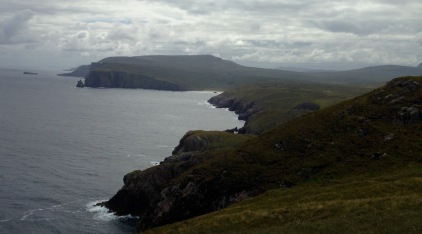 Looking east from Cape Wrath towards the Cliffs of Clo Mor. 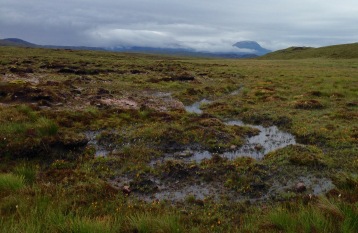 Up to my knees: the longest five hours of my life. Taking the wrong route towards Cape Wrath. 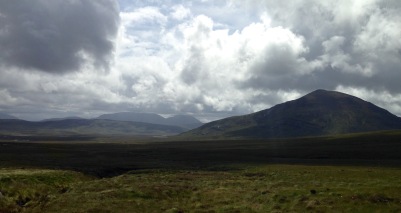 The wrong side of Fashven: taking the wrong route to Cape Wrath. 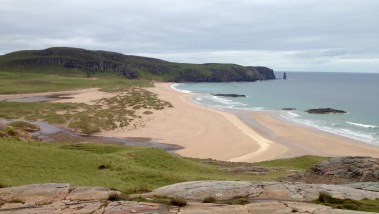 Sandwood Bay with Am Buachaille pillar; often referred to as the most beautiful beach in Great Britain.

Looking towards the mouth of Loch Inchard from Kinlochbervie. 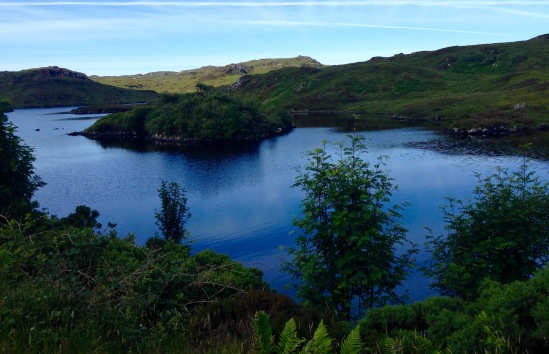 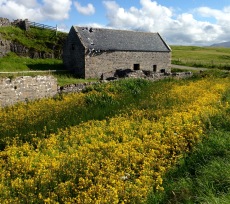 A not untypical scene. 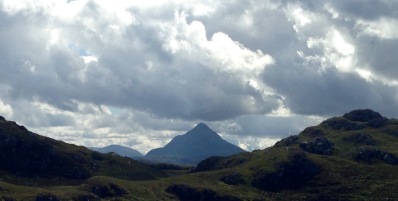 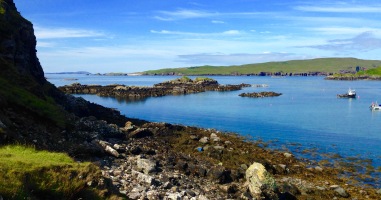 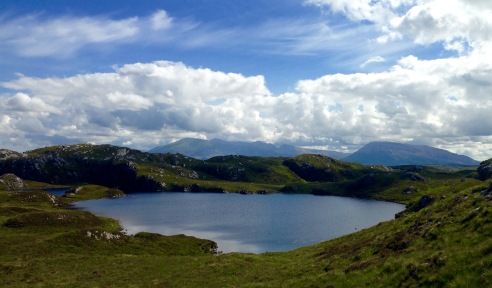 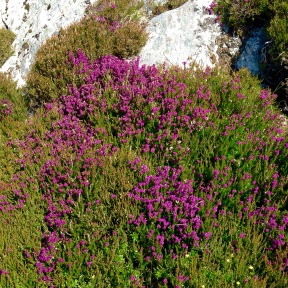 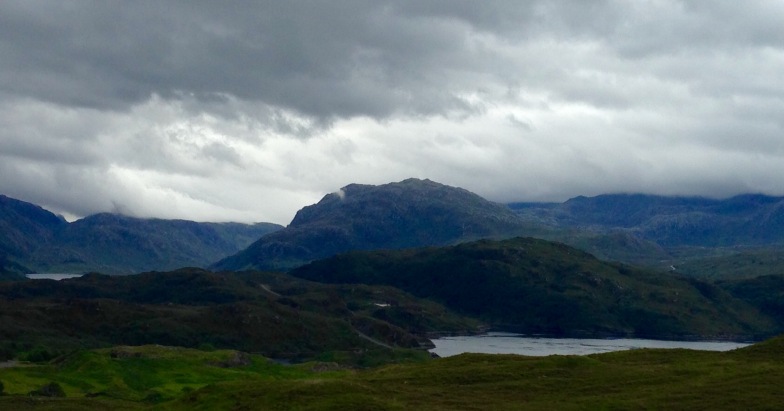