“You must be mad”.  The man I had just met while walking across the Forth Bridge was emphatic.  “Walking round Scotland in winter?  You must be mad”.  I could see his point but I wanted to reach Glasgow this year.  Hence the early start: the coast of Fife, in January.

I always had the impression that my landlord in Inverkeithing narrowed his eyes slightly whenever he spoke to me.  “You’re walking then?” … “Yes” … “Just the Fife Coast Path?” … “No, I’m going to Glasgow” … “Well, you’re going the wrong way then, aren’t you!” … “No, I’m going Round the Top.  To Glasgow via Cape Wrath” … “You’re going Round the Top?” he echoed.  At which point his eyebrows nearly collided with his hairline.

At 7.30am I was on the London Underground heading to King’s Cross station for the Edinburgh train.  At 2.15pm I was in the middle of the Forth Bridge, feeling disoriented, as if I had just dropped in from another planet.  I left home in a T shirt; by the time I reached the north shore of the Firth of Forth I had added a wind shirt, fleece, raincoat, gloves and hat.  The same hat I have worn for the last 2,000 miles of walking; at the risk of looking like a vagrant.

In October 2015 I walked to the south side of the Forth Bridge, (Walk no. 12 of this Blog), but rather than heading north and crossing over as I was doing now I turned south and walked down to Scarborough in Yorkshire.

Now, I confess with a very great deal of trepidation, I am ready to walk round the rest of Scotland.  I have already walked around the coastline of the rest of Great Britain, so there’s nowhere else to go.  But Scotland worries me: so far, so remote, so cold, so empty.  Everyone I had met in Scotland on previous walks could not have been nicer or kinder to me, but the very thought of “Walking Round Scotland” felt like walking into a howling void.

In some ways I was right, but in more ways I was wrong.  The coastline of the Kingdom of Fife which I walked from the Firth of Forth to the Firth of Tay, to a point some four miles out of Dundee, proved to be a pleasant and benign introduction to Scotland’s east coast.  The going was easy underfoot, the people were charming, B&B’s were excellent and very reasonably priced, public transport was frequent and reliable.

And I was lucky with the weather.  It was certainly cold: I saw ice on puddles and the wind off the sea was bracing, but although it rained in front of me and behind it never rained where I was walking until two minutes after I boarded the train back down to Edinburgh when it poured down.

So, I set off eastwards from the Bridge.  The sun was shining up from the south which meant that when I looked back over the Firth of Forth towards Edinburgh and Leith I saw the world in a rather threatening and wrathful chiaroscuro.  Black, white, grey; light and dark.  I spent my first night, comfortably, in Inverkeithing.

The coast of Fife alternates between areas of inhospitable rocky foreshore and beautiful stretches of beach: empty, a suggestion of remoteness, but I found none of the desolation I had feared.

I found that the coast of Fife has an interesting history, much of which no longer survives.  Walking round Dalgety Bay and on to Aberdour I passed the ruins of churches, abbeys, castles and long lines of stone walls demarcating the private preserves of the local gentry in years gone by.  A little way offshore I saw the ruins of Inchcolm Abbey resting in romantic seclusion on the little island of the same name.  Founded in 1223 the Abbey flourished until monastic life was abolished hereabouts in 1560 by the Reformation.

Although you would not guess it now Buckhaven, possibly founded by Vikings in the ninth century, was once a thriving fishing port boasting 198 boats, the second largest herring fleet in Scotland.  Over the centuries weaving, fishing and mining all came and went.  I passed a number of little seaside towns with disproportionately large sea defences enclosing echoing empty harbours.

In Lower Largo I saw the house where Alexander Selkirk was born in 1676; he spent four years and four months living in complete solitude on the island of Juan Fernandez and was immortalised by Daniel Defoe as Robinson Crusoe.  I had not realised that the reason Selkirk ended up on his desert island was that he judged his ship to be unseaworthy and so asked the captain if he might be put ashore, where he remained awaiting onward transport for over four years.

I spent a night in picturesque Anstruther, widely famed for its fish and chips.  In Crail, which once had one of the largest markets in the whole of medieval Europe and today looks like a prosperous Cotswold market town, I met a charming family and we talked for a while as I waited in the biting cold for the bus back to Anstruther for the night.  They were so friendly and full of encouragement for my walk “Round the Top” that I felt warmed and cheered in spite of the cold, as the temperature plummeted towards freezing; as though I had drunk a glass of piping hot mulled wine!

Finally I walked through St. Andrews with its cathedral ruins, its ancient university, and its golf courses, and headed on up to Leuchars and, early one morning, walked through the Tentsmuir Forest to the Firth of Tay.  I ended this walk at Tayport where I saw the first snowdrops of the year.

The Forth Road & Pedestrian Bridge. 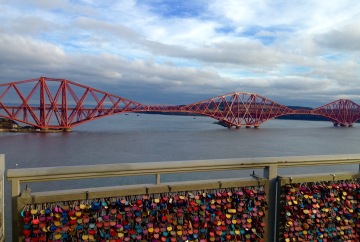 Lovers’ locks Forth Road Bridge, looking towards the Rail Bridge.

Bridges across the Firth of Forth.

The Firth of Forth, oil rig. 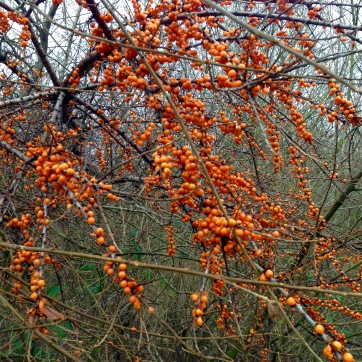 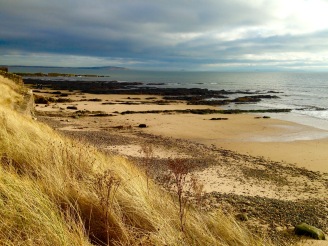 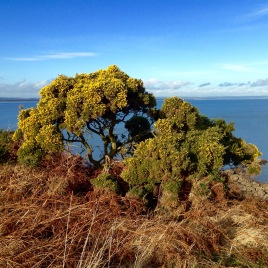 The Firth of Tay. 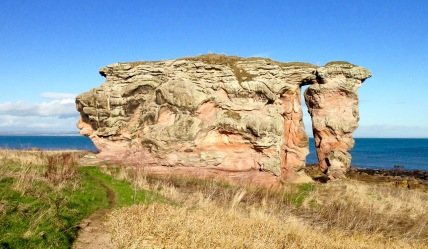 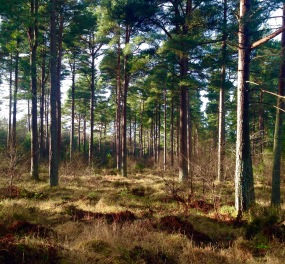 First snowdrops of the year.

At the mouth of the River Tay; early.