The further I ventured into Cornwall the more I became intrigued by the county.  I had a strong sensation of entering a different realm, of being in transition, of going somewhere different –

The Cornish language is still sometimes used on street signs; St. Piran’s Day (March 5th) is Cornwall’s national day and I saw the Cornish flag, a white cross on a black ground, flying from church spires and towers.  Falmouth has its own sub-tropical micro-climate: palms and exotic flora abound.  The beautiful 13th century waterside church at St. Just in Roseland is surrounded by un-English gardens full of flowering azaleas, magnolias, palms and monkey puzzle trees.  Duporth is like a nineteenth century harbour in the days of the Onedin Line: tall ships and three masted schooners moored beside ancient stone quays.  Working, self sustaining fishing villages, like Mevagissey, perpetuating the past rather than recreating it: all narrow winding alleys and fishermen’s pubs.  Little seaside towns such as Fowey, St. Mawes and Coverack: picturesque seaside cottages and jumbles of streets tumbling downhill to seafronts and tiny harbours, looking strangely unspoilt and unencroached upon by the outside world.

Towns, villages and churches all seemed to be named for saints whose names were unfamiliar to me.  I assumed they were Christian, but who was St. Keverne, or St. Constantine or indeed St. Piran?  And what of St. Winwaloe whose 15th century church I came across, nestling in the dunes, protected from the sea by an enormous rock?  (Piran, I was advised, is the patron saint of both tin miners and of the county itself).  And a man I met on the 20 minute ferry crossing from St. Mawes to Falmouth told me that much of the pantheon of Cornish saints consists of evangelising Celtic missionaries from Ireland who had converted the Cornish to Christianity in the 4th and 5th centuries.  So they were Christian, and hence their names had survived the Reformation.

Over the years scores of ships have foundered and been wrecked on these rocky coasts, and every cove and inlet seems to have once harboured smugglers and contraband.  On the way to Penzance I passed Prussia Cove, named for a notorious smuggler who had born a strong facial resemblance to Frederick, King of Prussia!

I had always assumed that the Lizard peninsula got its name from its snake’s head and long straight backed serpentine profile.  (In fact I discovered that the name comes from the Celtic “lys ardh” meaning “high court”).  Nonetheless, the rocks and reefs plunging from the shore into the sea all have a distinctly reptilian appearance, and at Lizard Point the land tumbles like a crocodile into the sea, with rocky snout, scaly back and lizard-like claws grasping at the seashore.

Quite suddenly, somewhere between Kynance Cove and Mullion Cove, a thick fog descended on the coast and I completely lost my bearings and sense of direction.  At one point visibility was restricted to 20 feet.  I spent two and a half hours floundering shin deep in flooded fields trying to retrace my steps.  Eventually, having realised that I was not going to find my way out of the fog, I decided to find some dry ground on which to sit until the fog cleared.  Then, I noticed the shadowy outline of a five bar gate which I found marked the end of a waterlogged path.  Having no idea which way was north I turned to feel the wind on my left cheek and hoped it was still blowing from the north west, as it had been before the fog descended.  Fortunately the wind had not changed direction and in time I came to a farm where kind people set me on my way again.

I walked up the west side of the Lizard with views over the sea to Land’s End.  For the last few miles I walked along the beach in bright sunshine, passed Marazion and St. Michael’s Mount, and into Penzance.

Near Fowey, looking back to Polruan. 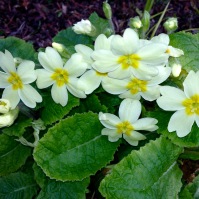 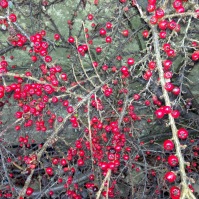 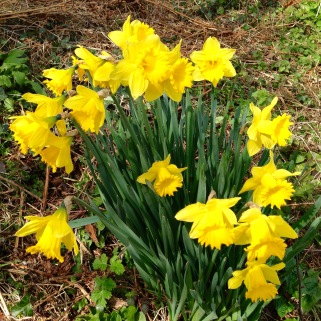 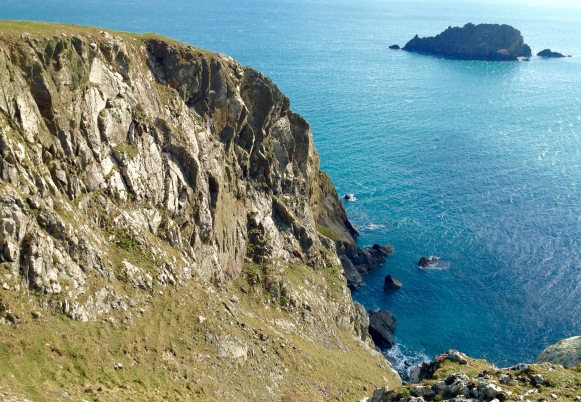 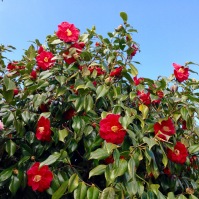 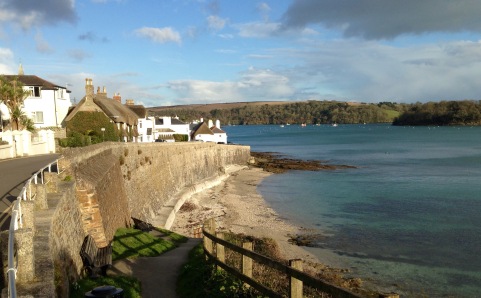 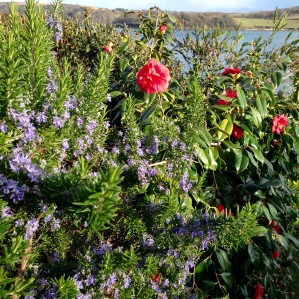 The harbour at Coverack. 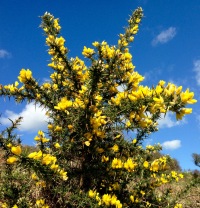 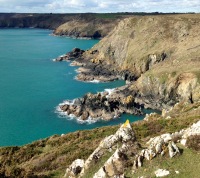 Long back & snake’s head of the Lizard. 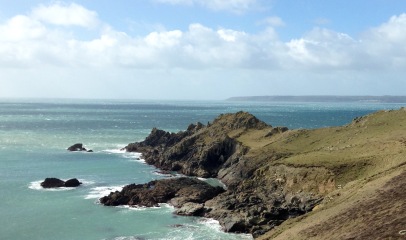 Mullion Cove during a break in the weather.