Arriving back in Tarbert on the bus from Glasgow in the late evening, I walked along the quayside and passed a vigil for two fishermen drowned when their boat capsized and sank in Loch Fyne.  The fishermen were obviously well known: people I met in Tarbert and elsewhere seemed sombre and saddened by the news.

Overnight snow turned to early morning rain as I walked from Tarbert into the Kintyre peninsula.  The peninsula is joined to the mainland by a narrow neck of land barely a mile across.  Looking at the map, planning my route, I had strained my eyes looking for any evidence that the peninsula was actually an island, in which case I could have passed by and would not have felt bound to walk the 50 miles down the East side of the peninsula to the Mull of Kintyre and back another 50 miles up the West side.  But however hard I looked it was indisputable that the peninsula was not an island and therefore had to form part of my route.

Slipping and sliding on the ice underfoot I walked to Kennacraig, passed the bus stop from which, if I timed my walk correctly, I would be catching the bus back to Glasgow in a few days time, on my homeward journey, at the end of  these walks.

From Kennacraig my route took me over the top of the Kintyre peninsula to Claonaig on the Loch Fyne side.  The temperature began to drop perceptibly and I found myself walking into a blizzard of snow and hail.  Heavy snow began to settle thickly on the fields around me, blown by a gale force wind coming in over Loch Fyne.  Strangely, whichever direction my route took me, the wind seemed to shift so that the snow was always being driven straight towards me!

Reaching Claonaig provided a brief respite from the weather, and then I walked a further 15 miles beside the sea to the little town of Carradale.  It snowed intermittently and I did not see a single person all the way.  In Carradale I stayed in a warm and friendly B&B and was invited to join the family for supper.  They even put my soaking wet clothes in the dryer!

Next day it was warmer and I headed off into the rain.  Near Saddell Bay I fell into step with a man out walking his dogs.  As we walked round the bay together he told me to watch out for otters and later in the morning I saw three of them.

It was only 16 miles to Campbeltown but I arrived feeling footsore and exhausted, after my long 25 mile walk from Tarbert the previous day.  I noticed some grand old merchants’ houses in Campbeltown and was told that there had once been dozens of whiskey distilleries here, at which time the town was the richest per capita in the whole of Scotland.  Campbeltown was of great strategic importance during the Cold War when the airfield at nearby Machrihanish was operated by the United States Navy for NATO.  The Americans pulled out in 1995 and the RAF took over; they in turn pulled out in 2012 and the site was sold for £1.  Although parts of Campbeltown are now dilapidated and boarded up (there are now only 3 distilleries remaining) the town’s fortunes are apparently on an up swing.

I spent 3 nights in Campbeltown, a stone’s throw from the bus terminal and the Co-op.  They are building a new school and a new hospital.  The hotel where I stayed was full of building contractors: I seemed to be the only person not wearing Hi Viz and a hard hat.

One morning I walked to Southend, the little town at the Southern end of the peninsula, and then walked around the coast back to Campbeltown.  I followed a section of the Kintyre Way which twists and turns for 100 miles as it criss-crosses the peninsula.

Another day I caught an early bus back to Southend, where I saw the sun rise out of the sea, and set off up the Mull of Kintyre, (mull being a Gaelic term for a hill or mountain, bare of trees).  Google Maps told me that it would take three and a half hours to reach the summit; assuming a similar journey time for the return journey, that would leave me with a 15 minute window before it got dark and the afternoon bus left for Campbeltown.  Mindful of the bus timetable I set off from Southend at a cracking pace.  The ascent was long and steep but I could not understand why I was almost overcome with exhaustion when I reached the top.  Until I checked the time and found that I had done the three and a half hour walk in two hours twenty minutes!  I walked down at a much more sedate pace.

Before descending from the Mull I spent some time at the disused radio station at Torr Mor enjoying the view over the sea towards Northern Ireland where the coast of Co. Antrim was just discernible on the horizon.  Yesterday on the local news I had heard someone proposing a bridge over the ten miles of sea between Ireland and this part of Scotland.  A number of people mentioned the Mull’s most famous resident to me: Paul McCartney.  He has owned a farm here since 1966 and his single “Mull of Kintyre” was the Christmas number 1 in 1977.

Being the only passenger on the bus back to Campbeltown I had an interesting conversation with the driver.  He reminded me about a disaster which had occurred on the Mull in 1994 when an RAF Chinook helicopter crashed in thick fog resulting in the deaths of the crew and all 25 passengers.  He had worked for the Fire Service at the time and had been part of the rescue mission dispatched from Campbeltown; he vividly recalled the scene: “heather on fire, bodies everywhere”.

Although “Severe Gales” were forecast for the next two days this was not quite so much of a problem as it might have been because the wind was blowing up from the South and so gave me a welcome push as I walked North up the West side of the Kintyre peninsula.  On the second day I arrived back at the bus stop at Kennacraig in good time for the afternoon bus to Glasgow and the train home. 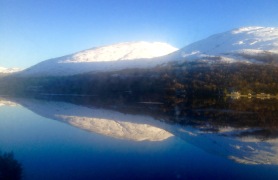 What a difference a day makes! Near Claonaig on the east side of the Kintyre peninsula, looking towards the Isle of Arran. 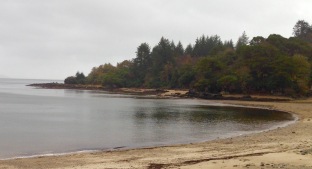 Saddell Bay, where I saw otters.

Approaching Campbeltown Loch; the Mull of Kintyre in the distance. 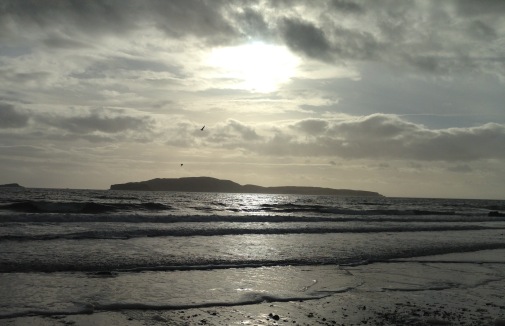 Walking from Southend back to Campbeltown; view of Sanda Island.

East of Southend, on the way back to Campbeltown.

Looking back towards Southend.

Ascending the Mull of Kintyre, looking back along the South shore of the Kintyre peninsula.

From the old radio station at Torr Mor on the top of the Mull. The coast of Northern Ireland just discernible in the distance.

“Severe Gales” near Bellochantuy, heading North up the West side of the Kintyre peninsula.

West coast of the Kintyre peninsula.

The mouth of West Loch Tarbert.

First snowdrops of the year.