At 9.00pm the northbound bus from Glasgow arrived in Lochgilphead where the temperature was minus 6 degrees.  The town seemed completely deserted; there was snow in the streets and ice on the pavements; out of the darkness a cold wind was blowing in across the loch.  In view of the weather, and because more snow was forecast, I decided it would be prudent to base myself in Lochgilphead (a name which caused me problems before I realised that the little town is named for its location at the head of Loch Gilp!).  I checked into the excellent and friendly guest house.

In the morning I saw a fiery sunrise reflected in Loch Gilp as I waited for the bus North to the Ardfern turning.  The walk back proved to be one of the happiest and most enjoyable of all my coastal walks.  The countryside looked beautiful, all blanketed in snow, the air was clear and bright, and the few people I met all seemed happy and cheerful.  I followed a network of lanes and farm tracks through a completely silent world.  Near Slockavullin I passed the prehistoric stone circle at Temple Wood, a site which may be 5,000 years old.  For a couple of miles I followed a minor road, straight as a die, across the Moine Mhor, the Great Moss, an ecologically distinct wetland area of moss and heather which borders Loch Crinan.  At Bellanoch I reached the frozen Crinan Canal and walked along the towpath all the way into Lochgilphead.

Next morning I saw another fine sunrise over Loch Gilp as I set off on the same bus to the Ardfern turning.  On the bus I met the first Scotsman who has ever admitted to me that he thought it was a cold day!  I was not surprised that this particular man felt cold because he was only wearing a light cotton shirt and a bomber jacket (unzipped), but nonetheless I felt thoroughly vindicated.  Although I was careful not to mention that when I agreed with him that it was in fact a cold morning I was actually wearing every scrap of clothing I could find in my back pack, including long johns, a thermal T shirt, a beanie hat and two pairs of gloves!

This time I walked North from the Ardfern turning to Kilninver.  I knew that the bus stopped outside the primary school but had not realised that the school was just about the only building there!  I must have walked much faster than I had anticipated I would (possibly due to the cold) because when I was 200 meters away from the bus stop an earlier bus roared past me.  Which meant that I had nearly three hours to wait for the next bus.  There was absolutely no one around, the light was fading fast and it was beginning to get really cold.  I tried hitch hiking and was extremely fortunate to get a lift all the way back to Lochgilphead with a man who was returning from work in Oban.  On the way we talked about all sorts of things: favourite authors, books we had both read and about walking.  I was very grateful for the lift and appreciated our conversation enormously.

On my third day I went South from Lochgilphead and followed the Crinan Canal to the set of lock gates where the Canal flows into Loch Fyne at Ardrishaig.  When it is not frozen, as it was now, the Crinan Canal, built in 1801, allows vessels to pass from Glasgow and the River Clyde to the Inner Hebrides without having to make the much longer voyage around the Mull of Kintyre at the end of the Kintyre peninsula, where I will be going on my next series of walks.

From Ardrishaig I followed the coast of Loch Fyne but was obliged to walk beside the road to Tarbert.  It was a busy road: lorries and huge logging trucks thundered past in both directions and I reached Tarbert in a daze.  In Tarbert I discovered that the online bus timetable I had consulted had not been updated and there would not be a bus back to Lochgilphead for another three and a half hours.  Rain turned to sleet, and then as the temperature dropped the sleet turned to hail.  Hitch hiking seemed like a good option and so with a smile literally frozen on my face I stood beside the road, battered by hail stones for an hour and a half, before a kind man from Scottish Power stopped and took me back to Lochgilphead.

On my last morning I took the now familiar bus back up to Kilninver and walked from the primary school bus stop into Oban.  I arrived in good time for the afternoon train to Glasgow.  It was a memorable train journey through a completely snowbound landscape.

Following lanes and farm tracks between Carnassarie and Kilmartin.

The village of Kilmartin in the distance.

Stone circle at Temple Wood near Slockavullin; the site may be 5,000 years old. 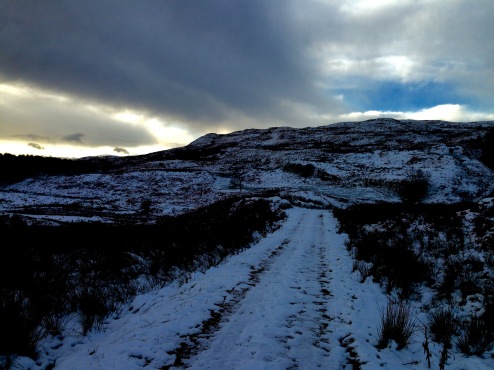 Following lanes and farm tracks between Carnassarie and Kilmartin.

The frozen Crinan Canal at Bellanoch.

The Crinan Canal near Cairnbaan. 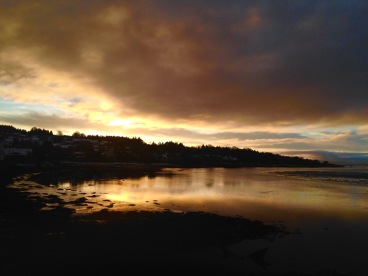 On the way to Kilninver. 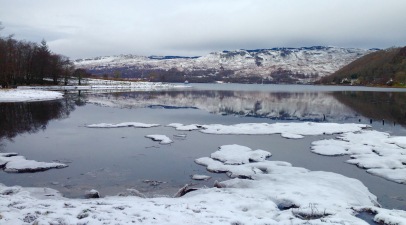 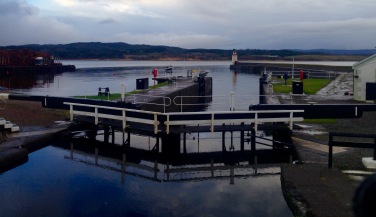 Lock gates at the Southern end of the Crinan Canal where the Canal flows into Loch Fyne.

Looking back to Ardrishaig. 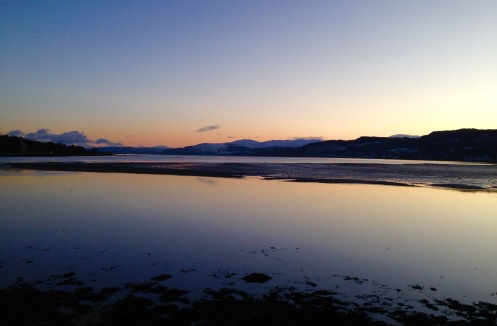