Passing St. Non’s clifftop chapel again, I walked down to the coast from St. David’s in a thick fog which cleared somewhat as I neared the most westerly point of mainland Wales at Pen Dal-aderyn.  The tide was powering up the narrow channel between the point and Ramsey Island, a long frenzied line of wild disordered waters surging between pools of calmer water closer inshore.

The most westerly point seemed very isolated and secluded on this foggy morning as I stood beside a cairn looking out over Ramsey Sound.  I was half expecting to see an arm rising from the turbulent seas, clad in chain mail and brandishing a be-jewelled sword.  It did not happen of course but the remoteness, the racing tide, and the swirling clouds of mist all conspired to make this seem a place where legends might accrue and myths abound.

I walked up and over St. David’s Head, making a slight detour inland to see a megalithic cromlech.  Stones and boulders seemed to be roughly grouped in vaguely circular arrangements giving the area a prehistoric feel.

The path to Trefin was spectacular: running along the very edge of high exposed cliffs which dropped away steeply to the foaming waves below.  Looking out to sea it was like being on the bridge of a great warship, or walking the uppermost battlements of an enormous seaside castle.

I stayed in a pub at Goodwick which prided itself on being “the last bastion of political incorrectness”.  I had been expecting blunt talk and pointed criticism but over the three nights I was there the place always seemed to me most friendly and welcoming.  From my window I could see the Stena Line ferries heading out across the Irish Sea to Rosslare.

One morning I passed Carregwastad Point: site of the “last invasion of Britain” in 1797, when troops from Revolutionary France had landed on the Welsh coast in what was intended as a diversionary attack to distract English attention from a full invasion of Ireland.  The escapade ended ignominiously after several days of indiscipline, desertion and looting when the French surrendered at a ceremony on Goodwick Sands, just in front of what is now the Goodwick branch of Tesco.

I found the landscape full of the colours of autumn on these walks.  Lots of heather and gorse in bloom and whole hillsides of bracken, often glowing a deep autumnal orange on the seaward flank and still green and vibrant on the landward side of the same hill.  Being September I noticed no “new” seasonal flowers this time but the trees and hedgerows were full of the red berries of autumn, often hanging in tight bunches like grapes on the vine.

Out to sea I saw seals and once passed a bay full of seals all basking in the sunshine.  Once I saw a brown form slithering in the waves and was told it might have been a bottle-nosed dolphin.

The scenery alternated between wild heathland and areas of rocky outcrops.  The further north I walked I noticed what seemed to me to be a particularly Welsh type of rock: boulders of an ancient and venerable nature, sunk deep into the earth, mottled and patched brown and white, mossed and lichened, cold and damp to the touch.

From Newport I rounded Dinas Head which towered 466 feet above the waves.  The 8-hour walk to St. Dogmaels was reputed to be the steepest and most challenging section of the whole Wales Coast Path.  For once getting my blisters under control, and feeling a strength in my legs, I powered over the contours of the land and almost felt as if I were flying, up steep slopes, swooping down sudden descents to isolated coves, followed by long sweeping hauls back up to the heights.  Five and a half hours later I reached St. Dogmaels, lightheaded and buzzing!

At St. Dogmaels the Pembrokshire Coast Path which I had followed for 186 miles from Tenby came to an end.  I walked across an ancient stone arched bridge into Cardigan and found myself in the mid-Wales county of Ceredigion.

On my last morning I made an early start to walk 14 miles to Aberporth, to be in time to take the 10.00am bus to Aberystwyth for the train home.  I set off at 6.00am while it was still dark.  I passed, in the strengthening light of dawn, farms and hamlets with names of wonderful poetry: Gwbert, Y Ferwig, Hafod, Nantycroy, Ty Gwyn, Mwnt, Pencestyll, Pen-y-craig, Ffrwdwenith Uchaf, Parcllyn and finally Aberporth.  I did not meet a soul all the way to Aberporth and arrived feeling as if I had slipped for several hours into a strange dimension which was altogether foreign, misty, ancient, exotic, Celtic and intriguing. 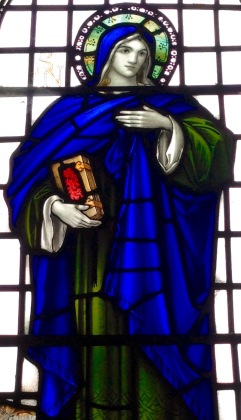 Porthlysgi Bay, towards the most westerly point, in early morning fog.

Pen Dal-aderyn: the most westerly point of mainland Wales. 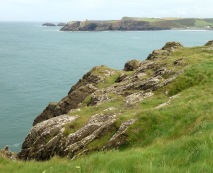 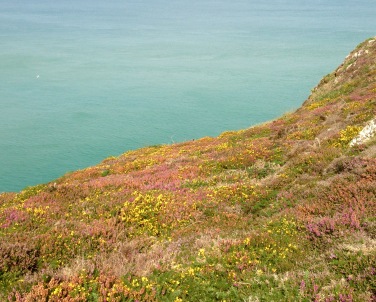 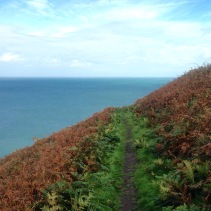 Moving on from Fishguard, early morning. 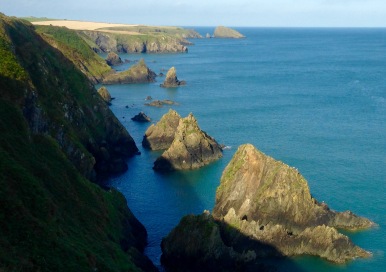 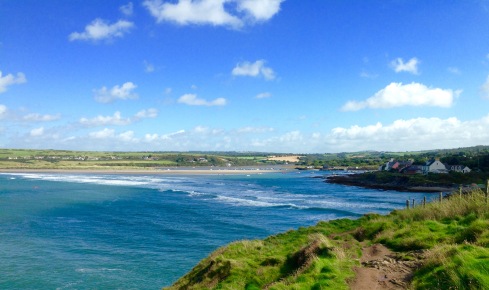 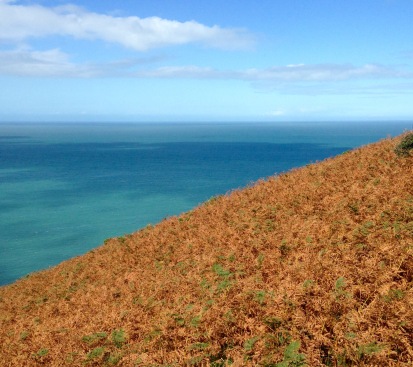 A venerable Welsh rock, with moss and lichen.

From Pembrokeshire to Ceredigion: three days to Aberystwyth. 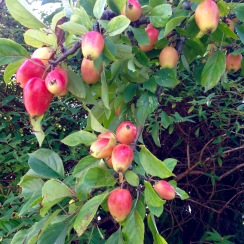 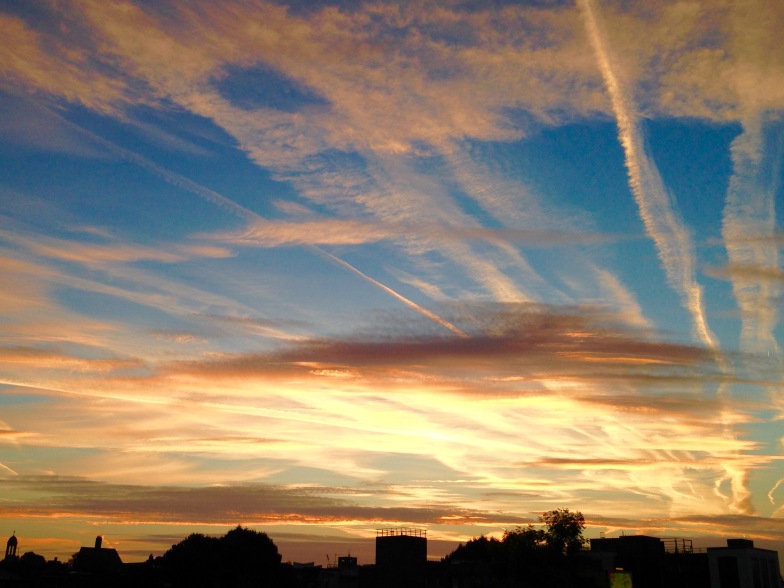 Sunrise on Tuesday 13th September 2016: the hottest September day since 1911.