Nelson described the deep water port at Milford Haven, (Aberdaugleddau in Welsh), as the finest natural harbour in the world, with only the possible exception of Trincomalee in Ceylon.  It took me three days to walk around the Haven and away from the enormous oil refinery I was surprised how beautiful the coastline was.  Fine sandy beaches, rocky coves, high cliffs, windswept headlands, and a huge Norman castle at Pembroke.

I spent three nights at Pembroke in a friendly B&B run by a remarkable man named Peter.  He had an air of being beset by all the problems of the world and reminded me of the boy with his finger in the dyke, valiantly holding back the encircling tides of disorder, but nothing was ever too much trouble for him and however busy he would drop everything to have a kind and friendly word with one of his guests.

The B&B was a stone’s throw from Pembroke Castle where, Peter told me, Henry VII was born and which endured a siege of 48 days during the English Civil War, subsequent to which Cromwell tore down Pembroke’s city walls.

In the guidebook I read that the far south west of Wales had been occupied in force by the Normans in the 11th and 12th centuries.  Apparently the area was then known as “Little England beyond Wales”: it was heavily defended by over fifty Norman castles, and was demarcated by an ancient language boundary known as the Landsker Line which runs roughly from Tenby in the south to Cardigan in the north, from Dynbach y Pysgod to Aberteifi.

The area to the west of the Landsker Line certainly felt much more recognisably English than other parts of Wales I have walked through, although I was often aware of overhearing conversations in Welsh, (ladies in supermarkets particularly!).

I had a challenging day’s walking on the north shore of Milford Haven, rising at 5.30am to catch three separate buses to my starting point and then having to time myself over a twenty mile walk to be in place to make two tidal crossings, over low foot bridges and stepping stones, which were only exposed at low tide.

Most days the weather was beautiful, but walking on from Pembroke it rained incessantly and the mist was so thick that crossing the high level Neyland Bridge I could hardly see the boats far below.

Finally, after two long days walking around the great sweep of St. Brides Bay, I arrived in St. David’s.  St. David, patron saint of Wales, (Dewi Sant in Welsh), lived and died here, and his mother St. Non is commemorated in her own clifftop church a mile to the south.  Living in the wilds David sustained himself on wild leeks, hence the leek has been the national symbol of Wales ever since.

St. David’s is Britain’s smallest city.  As a city it is tiny, the size of a village; it took me just four minutes to walk from the first house into the centre, but due to the presence of its twelfth century cathedral St. David’s qualifies as a city.  It is Wales’ holiest site, Christian worship having been proclaimed here for over 1500 years.

Three or four miles west of St. David’s lies the most westerly point of mainland Wales, but I decided to leave that for the next walk and took the bus to the railhead at Haverfordwest and home. 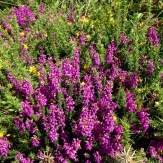 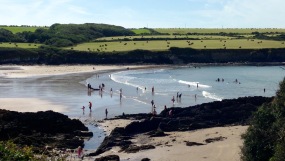 Across the mouth of Milford Haven. 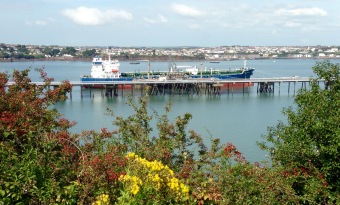 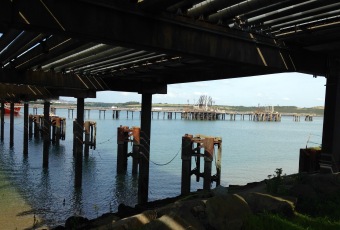 A rainy evening in Pembroke. 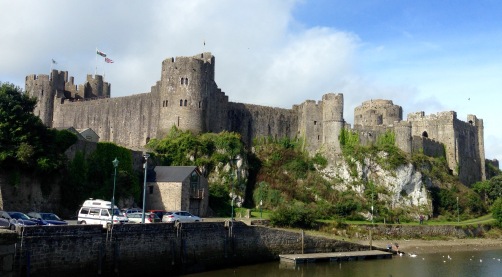 Tidal crossing between Musselwick and Dale. 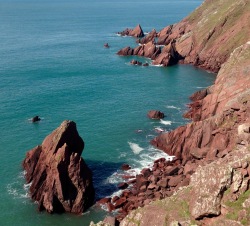 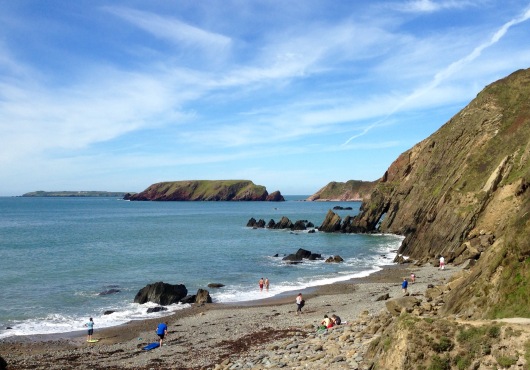 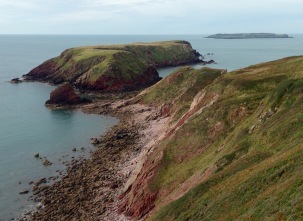 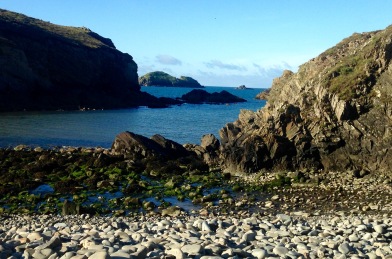 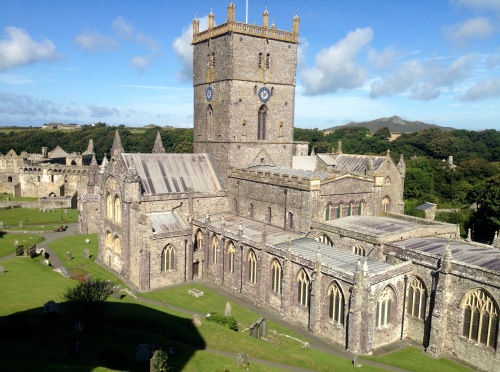 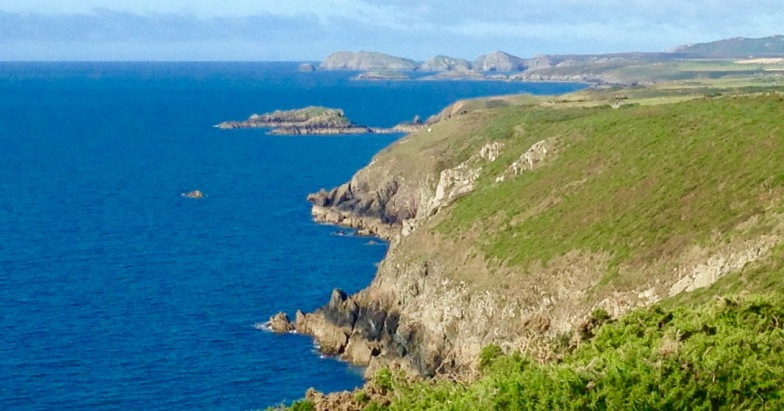 Looking ahead along the coast from St. David’s, to the next walk, to the most westerly point of mainland Wales.