A  long blog-post for a long walk.  I was keen to finish the South West Coast Path on this walk.

I based myself at Barnstaple for several days, staying in a B&B where I had breakfast each morning with Richard, a fellow walker, Monroe Bagger and part-time Alpinist; from Reading, he was walking the Coast Path in short sections.

It was an easy stroll, walking on from Clovelly, the path descending through sunlit woods where dense carpets of bluebells rippled and flowed between the trees and swept up the sides of the wooded verges beside the path.  Everywhere gorse was in full bloom, splashing the land with bright patches of Chinese yellow.

I followed the path down and eventually reached sea level at Westward Ho! where I saw sand for the first time since Polzeath.  Westward Ho! – the only town in the country to be named after a novel, and the only town whose correct spelling includes an exclamation mark!  I made my way through Bank Holiday crowds, milling around the sea front, and on the way to Appledore bumped into Richard, from the B&B; he was walking towards Clovelly: on the banks of the River Taw we solemnly shook hands, like Livingstone and Stanley meeting in the Congo!

I walked into the pleasant riverside town of Bideford and crossed the River Torridge by the Long Bridge, one of the longest medieval bridges in the country (1474).

As there is no bridge or ferry across the half mile mouth of the River Taw I was obliged to make a 23 mile detour inland following a riverside cycle path, known as the Tarka Trail for the famous otter, from Bideford inland to Barnstaple and then back out to the sea at Croyde.  Crossing the high sweep of the new road bridge at Barnstaple I was encouraged to move on quickly by a police officer as his colleague endeavoured to talk down a desperate looking man standing precariously close to the edge of the bridge.

Next morning the forecast was abysmal: beneath a bruised, swollen-looking sky everyone in Barnstaple seemed to be awaiting the arrival of the storm.  The wind was so strong that it took both hands and my whole body weight to close the gates I passed through on the Coast Path.  The storm broke as I was descending to the long wide stretch of Woolacombe Sand.  Pouring rain and furious blasts of wind: I was drenched in minutes.

Passing bedraggled huddles of tourists sheltering where they could along the front at Woolacombe I set off alone along a stoney finger of land leading out to Morte Point, named by the Normans for the treacherous reefs which lie offshore.  The promontory was like a stone armadillo, consisting of sharp, up-pointed spikes of rock.  In driving rain I hastened along the narrow path, hoping to round the Point in advance of a thick bank of sea mist which was gradually drifting ashore.  Near the Point I met the Incredible Laughing Man.  As we shouted above the gale to each other he ended every sentence, his and mine, with a great roar of laughter.  Eventually, for no ascertainable reason, my goodbye left him convulsed with merriment and walking on a couple of hundred paces I turned to find him standing in the rain silhouetted against the sea, still shaking with mirth.

During the afternoon the rain cleared and by the time I reached Ilfracombe the sun was shining brightly.  On the way I met a number of other walkers; all were soaked through and looked heartily fed up; conversation was restricted to a testy “You got caught out in it too, did you?”.  In Ilfracombe holiday crowds were ambling, enjoying chips and ice cream.  I stayed at the Imperial Hotel: unable to resist the name, and it was the cheapest deal in town.

The fine weather held and next day I set off early on a long stretch to Lynton.  I seemed to be the only walker going clockwise; all the other walkers had started the Coast Path in Minehead where I was planning to end it in two days’ time. Near Martinhoe I encountered some of the longest and steepest descents of the whole Path.  Near the Valley of Rocks I passed a number of beautiful copper beeches and other red leafed trees, like an unseasonal intimation of autumn.

I spent the whole afternoon following a narrow high level path, etched into the flank of the cliff beside a tremendous drop to the waves below.  It was like walking along a tightrope, as though suspended in mid air, with spectacular 180 degree views out to sea.  The weather was perfect, the walk completely exhilarating.  Luckily I did not meet a soul all afternoon, and into the evening: I was not sure how two walkers with backpacks could have passed each other on such a high narrow path.

At last, in clear evening light, I staggered into Lynton, found somewhere to stay and was too tired to go out for something to eat.

After an enormous breakfast, when I almost ate my landlady out of house and home, I walked down from Lynton to Lynmouth, by the beach, and then through woods where the path was pungent with the scent of flowering wild garlic.  I walked up and up to the summit of Foreland Point and on the far side met the first of the morning’s walkers coming up from Minehead; they spoke of Foreland Point with a mixture of awe and dread: it is the highest point of the whole South West Coast Path.

For my last night on this section of the walk I stayed in the tiny hamlet of Bossington and in the morning set off on the final section to Minehead in Somerset.  The coast path skirted the edge of Exmoor, beautiful rolling downland, the path sometimes flanked both sides by long lines of gorse.  I was walking beside the Bristol Channel and on the far horizon had my first views of South Wales.

In the woods approaching Minehead I saw the first rhododendrons just coming into bud.  I passed the tiny church of St. Beuno (pronounced Bayno), mentioned in the Domesday Book and reputedly the smallest parish church in the country.  From the top of the last hill before Minehead I looked north in the direction of Bristol: the next walk looked reassuring flat!  I celebrated finishing the 630 mile South West Coast Path with an ice cream cornet.  Strangely in 3,500 miles of coastal walking, I have only had an ice cream once, at Eastbourne, a couple of years ago.

Walking on from Clovelly. 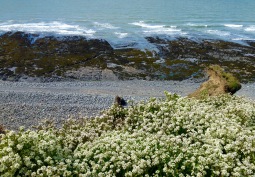 Looking across the Bristol Channel.

Mouth of the River Taw. 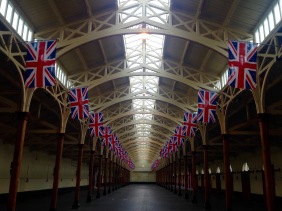 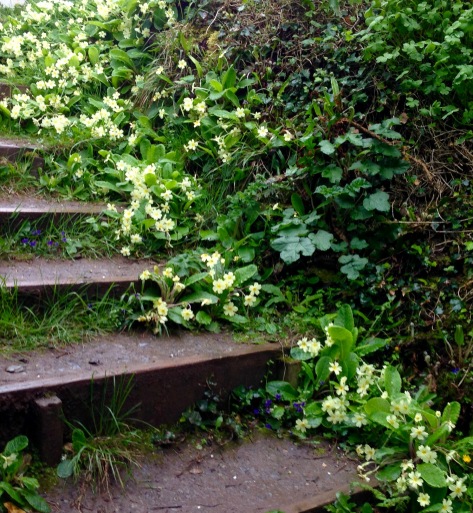 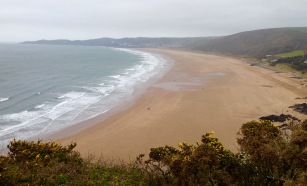 Morte Point, in the rain. 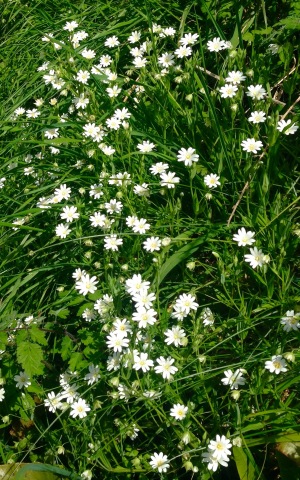 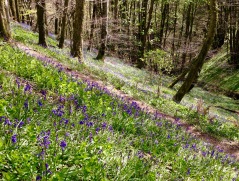 First view of Wales on the horizon. 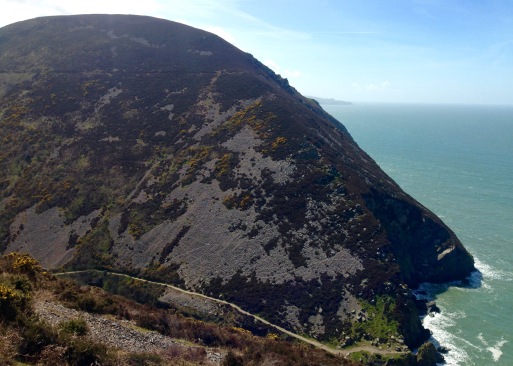 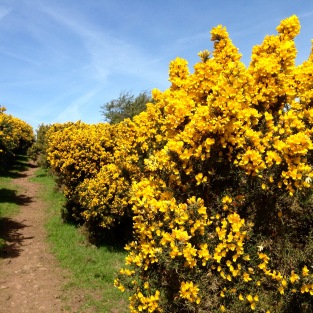 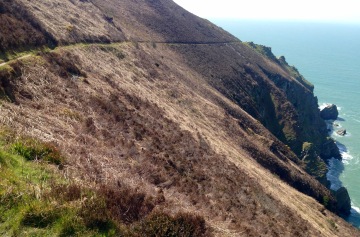 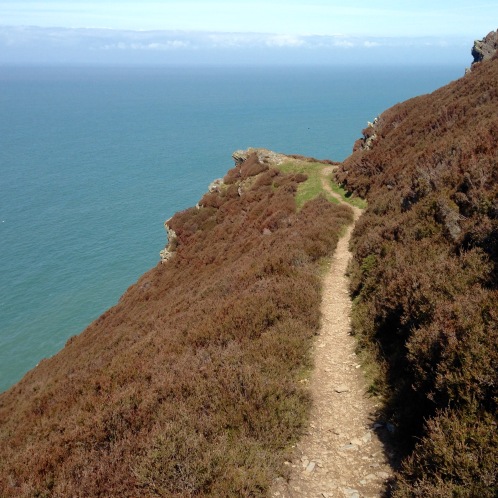 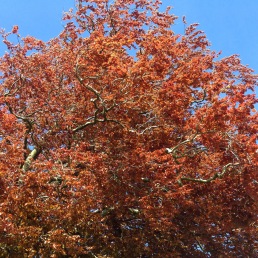 The Valley of Rocks. 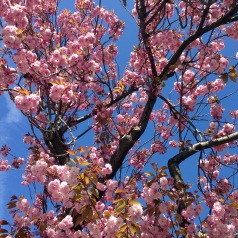 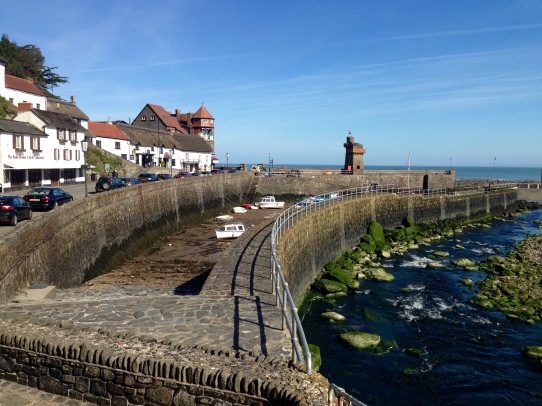 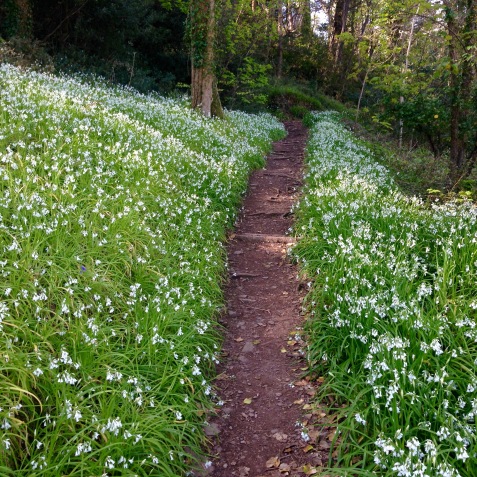 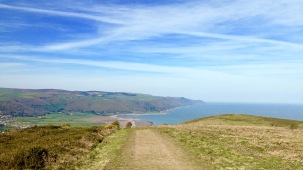 Walking up to Exmoor from Bossington. 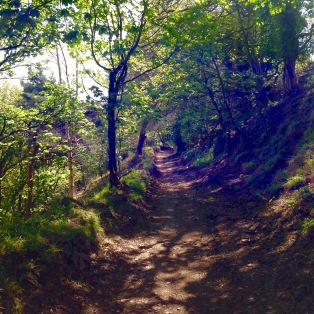 The Path near Minehead.

Looking forward to the next walk, Minehead.