“Come to do some more walking then?”.  The barman at the Douglas Hotel in Hartlepool remembered me.  In the morning I set off early for the long roadside walk down to the River Tees and Middlesbrough.  On my way out of Hartlepool I passed a pub named for the unfortunate monkey which was dressed up as a French sailor during the Napoleonic Wars and then executed for being an enemy agent.  I walked to Seaton Carew, passing its wide sandy beach, and then turned inland to walk beside a busy A road all the way down to Teesside.  There did not seem to be any footpaths in the Teesside area so I was obliged to walk into and out of Middlesbrough beside major roads.

I had never seen such a heavily industrialised part of the coast.  I passed three industrial estates, two chemical works, an oil storage depot, an oil terminal, two oil refineries, pumping stations, pipelines, numerous flare stacks and any number of smoking chimneys.  At length I reached the Tees and in the lee of a distillation works found the wonderful Tees Transporter Bridge, a kind of suspended platform which glides above the river to Middlesbrough.  In front of us the old riverside docks looked derelict, with a doleful air of having been passed-by and superseded.

On the way over the Transporter Bridge I chatted to a local man.  In spite of the industrial decay around us he exuded a strong civic pride and I admired the way he spoke of “our” city, the Boro as “our” football team, and how do you like “our” Transporter Bridge?  He offered me a lift to Redcar, on the coast at the mouth of the Tees, and understood when I declined and said I had to walk.  Later as I walked beside the dual carriageway towards Redcar he drove back passed me, hooted and waved.  Walking out of Middlesbrough I passed massive industrial behemoths, some with smoking chimneys, others forlorn and abandoned.

Returning on the train to Middlesbrough for the night I had to walk for half an hour to my B&B.  Walking long streets of small semi-detached red brick houses I found a strong Asian community.  I asked for directions.  “Go straight, turn right at Khan’s”  “Where?”  “You know Khan’s?”  “No”  “You don’t know Khan’s Halal Meats?”  “No”  “OK then, you see the mosque with the green dome?”  “Yes”  “Left there, then right at the saree shop”.  My landlord was Asian; a very charming man.

Walking through Middlesbrough next morning I liked the city.  It had a very nineteenth century feel to it: there was an openness to its centre, wide streets, grand if grimy buildings remaining from a prosperous commercial past; interesting architectural motifs and decorations.  I noticed how the red brick residential streets lapped right up to the edges of the city centre.

From Redcar I walked several miles along the beach to Saltburn by the Sea, along the line where the waves broke on the sandy shore.  Beyond Saltburn the land rose sharply and the Cleveland Way, which I was now following, ran along the very edge of precipitous cliffs which plunged down some 600 feet to the sea.  All the way I passed evidence of ancient industries: alum quarries and ironstone mines.  I descended steeply to Skinningrove, with its long serpentine jetty, and then walked up and over high ground to descend again to Staithes, a closely packed knot of houses beside the sea.  A man up a ladder greeted me; he was busy repairing the damage of last weekend’s storms and told me of a house in Saltburn which had its whole roof, joists and beams, peeled off by the wind.

While walking from Staithes to my journey’s end at Scarborough I stayed for three nights at the excellent Youth Hostel in Whitby, high on the clifftop, up 199 stone steps from the town, and located in a Grade 1 listed mansion adjacent to the ruins of the 13th century Abbey which had inspired Bram Stoker when writing “Dracula”.  I enjoyed staying at the Youth Hostel.  One evening I had a long and interesting chat with Andrew, a fellow walker from Halifax, and over breakfast one morning I met Ian, dapper in his cotton neckerchief, who was cycling the Yorkshire Moors and talked amusingly about the “unwelcome hills” on his route.  Whitby was the childhood home of Captain Cook and for that reason is now twinned with Tonga.

An additional pressure of walking the clifftop path at this time of year was that I had to be sure to have finished my walk before it started getting dark at 3.30pm and be in a position to return by bus to my overnight accomodation.  Fortunately there was an hourly bus which ran along the coast all the way to Scarborough, so I became adept at hopping on and off each day, and walking 17 miles or so at breakneck speed in between!  An exhausting routine.  When rain fell it did so in torrents, and every day there was a tremendous gale blowing which, particularly after rain when the path was muddy, had me skidding and slipping all over the place.  On a morning of furious gales and gusts of wind I found myself being repeatedly propelled right across the path and had to resort to walking bent forward to counteract the force of the wind.

I descended the last line of hills to Scarborough’s North Beach late one stormy afternoon and ended this 800 mile coastal walk from Liverpool sitting on the same bench outside the Grand Hotel where I had finished my walk up to Scarborough from London in September 2014.

The beach at Seaton Carew.

Towards the River Tees. 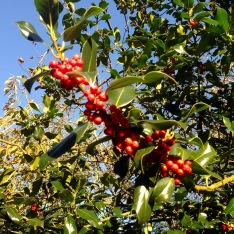 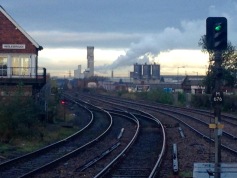 The beach at Redcar.

Beach walk to Saltburn by the Sea. 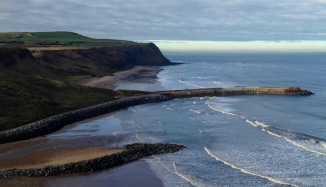 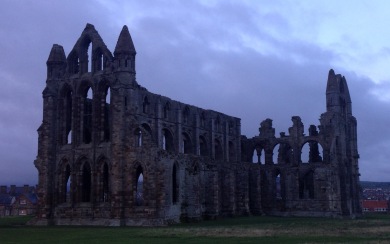 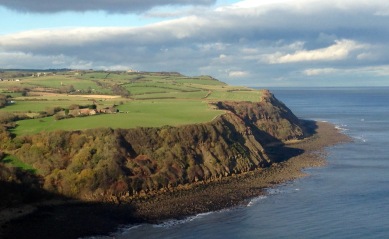 2 thoughts on “WALK 16 : FROM HARTLEPOOL TO SCARBOROUGH.”