From Maryport up to Carlisle I followed the southern shore of the Solway Firth.  At Maryport the railway line to Carlisle veers away inland leaving a less frequented coastal hinterland where the roads are smaller and quieter, the towns feel more sui generis and unto themselves, and the coast is home to tens of thousands of roosting sea birds.

Named for the wife of a local landowner Maryport thrived, like Whitehaven and Workington, as a trading port in Georgian times and then made the transition to industry in the Victorian era: an iron foundry opened, shipyards developed and coal was mined nearby.  However, overnight Maryport became a backwater when in 1927 a deep water dock was opened in Workington.  Walking up and over the hill from the station to the coast I found that the town now has a kind of muted buzz from small shops and independent traders.  Although the docks were closed in the 1960’s the long lines of harbour walls and sea defences remain, empty but still impressive.  Passing through I liked Maryport: the Georgian legacy gives the streets a suggestion of width and space, regular wide windowed facades suggest an openess and a certain lack of complication, architecturally, and I saw three buildings which might once have been cinemas, dance halls or variety theatres in lighter headier days.  Although this was July 30th the early morning air had a distinct chill and the light, clear but hardly bright, seemed almost autumnal.

While Maryport retained a just discernible air of grace and stature, five miles up the coast the town of Allonby looked four-square in a close to the ground, battened down and defensive way, as if in perpetual readiness for the next deluge of rain and storm force winds to burst upon it.  I only remember seeing one two storey building.  By the time I reached Silloth, the next town along, the sense of Georgian space and ease had reasserted itself; I seemed to be seeing every street in wide screen format, and most of the streets were still entirely cobbled.  The first person I met when walking into town from the beach was a heavily tattooed shaven headed man with a fearsome dog in a spiked collar; looking at them I was momentarily uncertain which of the two I should be more intimidated by.  The dog settled the issue by lunging determinedly for my throat.  I was lost for words when the man, having managed to prevail over the dog’s enthusiasm, turned to me with a smile of disarming warmth and apologised profusely for the dog’s excesses!

Walking north from Maryport I was surprised to see flocks of seagulls and to hear their mewling overhead.  I was puzzled.  Surely there had been gulls previously on this walk?  When I reached Carlisle it too seemed to be full of gulls, wheeling, shrieking, present if not always visible around the ancient lanes and city walls of that imposing red stone, heavily fortified, castellated and crenellated city.

From Silloth, (surely a name of Old Testament provenance?), I walked out to Skinburness Head and then had to follow a long inland loop around an area of coastal marsh.  All the way from Maryport the wayside flowers in the hedgerows had been a riot of colour.  Walking round the coastal marsh I lost sight of the sea and instead found myself walking on minor roads and metalled lanes past fields on the cusp of harvesting and an abundance of exuberant wild flowers.

As I proceeded the Solway Firth narrowed, Scotland on the opposite shore drew closer with increasing definition.  It looked very empty and I wondered how I would find walking the coast there.  It looked like an enormous distance from Gretna to Stranraer.  There appeared to be mountains, and I saw sea cliffs, and very little sign of habitation.

I rejoined the coast again at Anthorn and on a fine sunny morning walked from there to Burgh by Sands.  I walked on a B road, yellow on the map, and only saw four cars and no other walkers all day.  At the point where the land meets the sea I saw huge flocks of sea birds: oyster catchers, plovers and gulls, the latter mainly the smaller white Common gulls but every so often a huge Black Backed Gull would glide in with a nonchalant air of awareness that size does in fact matter.  Now and again, as though summoned by some silent imperative, whole masses of birds would rise up from the beach in a densely packed cloud and having arced and wheeled in tight formation would settle a little way further down the coast.

At Bowness on Solway I sat in a kind of belvedere which marks the western end of the Hadrian’s Wall Path.  Two girls came in having just completed the walk in six days; they hugged and congratulated each other and went off to the pub to toast their success with champagne.  They were followed by three men on bicycles who were just starting their journey: “Areet pal!” one of them hailed me.

The area between Bowness and Carlisle was one of the frontiers of the Roman empire.  To ensure that the Scots did not merely walk round the western end of Hadrian’s Wall an earthwork, now grazed by sheep and cattle, was erected from Carlisle to the coast at Bowness; the area abounded in forts and look-out posts and was of particular strategic importance because there were three shallow crossings of the Solway Firth which could be made at low tide by cattle rustlers, marauders and even armies.

In spite of its name Burgh by Sands lies some way inland from the Firth.  Now a quiet village with an ancient church it was once the focus of the nation when in 1307 Edward I died out on the marshes while campaigning against the Scots.  He was laid in state in the church and is commemorated by a crucifix topped monument on the site of his last camp, and there is a statue of him in the village, looking implacable, holding an armoured helmet and brandishing a sword in the general direction of Scotland.

I walked from Burgh through the suburbs right into the middle of Carlisle and then on another day headed out across the last miles of England towards the border.  From silent fields and marshes I crossed the River Esk via a long road bridge in a cacophony of racing traffic and arrived ears ringing and slightly stunned in Scotland, at Gretna.  The end of the 3rd Curve and the beginning of the 4th.

Across the Solway Firth.

Over the Firth to Scotland. 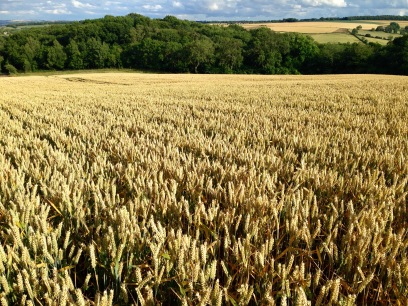 Inland around the coastal marsh. 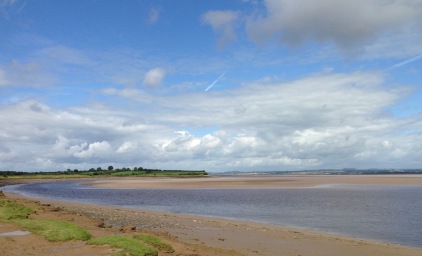 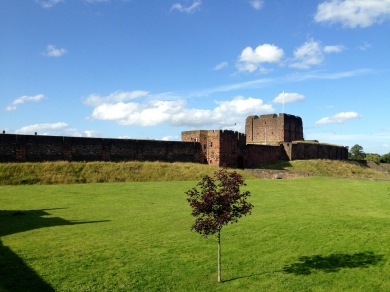 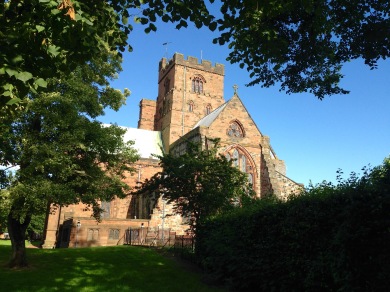 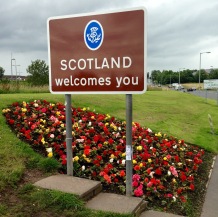